The movie which is said to be based on actions and martyrdom of legendary Sikh freedom fighters Bhai Harinder Singh Jinda and Sukhdev Singh Sukha was initially granted clearance by CBFC but the certificate of clearance was recently withdrawn by CBFC after interference of Indian government and Indian intelligence agencies.

Expressing disappointment over CBFC decision to ban the movie the film-makers said that their movie did not have anything objectionable and was an attempt to tell true story. 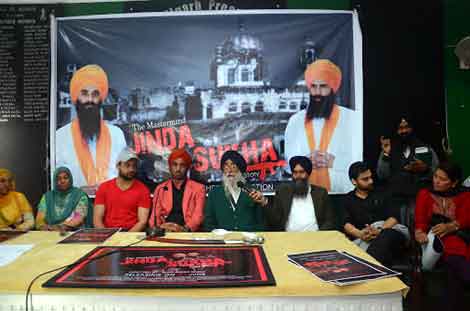 Simranjeet Singh Mann with makers of the movie Jinda Sukha

“Given the amount of preparations that went into preparing for the role, I wanted people of the state to know the historical facts as they are. The decision to ban the film has led to widespread resentment”, said Sukhjinder Shera, director of the movie.

SAD (Amritsar) chief Simranjit Singh Mann accompanied actor Nav Bajwa during a press conference against ban on the movie. Mann who blamed the Centre and state governments for the Censor Board’s flip-flop on the movie. The film was due for release on September 11 and it will still be screened overseas.

Former Congress MLA Sukhpal Singh Khaira said the decision of the Censor Board to ban the film based on the assassination of General AS Vaidya, was not only erroneous and wrongful but an attempt to hide historic developments that affected a large section of India’s population.

Although the Censor Board had cleared this film for screening on July 24, it later had second thoughts, allegedly under pressure from the Union ministry of home affairs.

Meanwhile, the film was released outside India today.