Ludhiana, Punjab: Bapu Surat Singh Khalsa was reportedly discharged by DMC Hero Heart Institute today but he was readmitted to the hospital by Ludhaina police.

“We arrived at the hospital after we received the call. The paper work took around three hours and Bapuji was discharged around the noon”, Bibi Sarvinder Kaur said. 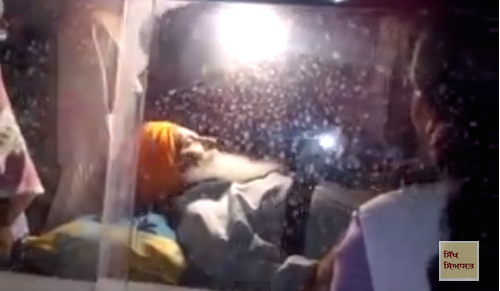 “During this time the police arrived at DMC Hero Heart Institute in large numbers and told us that we could not take Bapuji home” she added.

Meanwhile, a Facebook post on Bapu Surat Singh Khalsa’s page maintained that the “authorities asked bapuji’s family to pay hospital bill of 2 lakh which has been politely refused by Bapuji’s son Ravinderjeet, contending that Bapuji has been hospitalized by authorities NOT family”.

“Amid of this drama, Bapuji has been forcefully admitted back to hospital and threatened arrest”, it reads further.

However, while talking to Sikh Siyasat News (SSN) Bibi Sarvinder Kaur refuted the argument that non payment of hospital led to re-admission of Bapu Surat Singh to the Hospital.

“There was no such issue. No body told us to pay any sort of bill or make payment for any charges. This information is incorrect”, Bibi Sarvinder Kaur told SSN over phone.