Bapu Surat Singh Khalsa has even refused to talk with the government and top officials till the release of Sikhs who were arrested by Police during last two-three days in relation to his struggle.

Bapu Surat Singh further said that on Monday late evening Additional Director General of Police (Intelligence) Hardeep Singh Dhillon along with other officials visited him but he refused to talk with him and demanded the release of Sikhs who were arrested by the police to suppress the struggle. 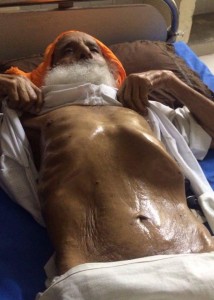 Bapu Surat Singh Khalsa is on hunger strike since January 16

SSP Jagraon Ravcharan Singh Brar has conveyed the message of Punjab DGP Sumedh Saini regarding the release of his supporters but police is yet to fulfil its promise, Bapu Surat Singh reported told some media persons.

“I will not initiate talks with the government and officials till his supporters and members of Sangarsh Committee were not released from the jail”, said Surat Singh Khalsa from the hospital bed.

Admitted in the ward of civil hospital Ludhiana under heavy security cover of Police, Bapu Surat Singh said that he had already announced that if the police will forcibly shift him to hospital or offer him medical treatment then he will stop intake or water. Earlier, he use to take water, lemon water during the hunger strike since January 16 this year.

While refusing to take medical treatment and diet, Bapu Surat Singh said that Punjab Chief Minister Parkash Singh Badal has “the medicine of his ailment” now it is for Badal to decide if he want to offer treatment or not. (He indication was to permanent release of Sikh Political Prisoners who have already completed terms of their sentences).

Bapu Surat Singh insisted that he not take water or medical aid till the Sangarsh Committee will decide the next strategy.

Civil Surgeon Renu Chatwal said that Khalsa’s condition was stable. He has not taken medicine, but he is under the observation of a team of doctors.