Ludhiana, Punjab: Bapu Surat Singh Khalsa who is hospitalized at DMC Hospital Ludhiana by the Punjab Police has reportedly served a notice to Ludhiana deputy commissioner Rajat Agarwal yesterday maintaining that he was held under “illegal detention” by the district administration. He has asked the DC to explain his illegal detention. 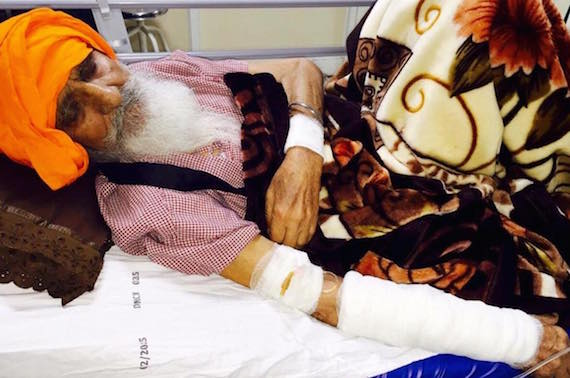 “If he is a patient, then patient too enjoy some rights and none can be stopped to meet their relatives are well wisher”, Sahni added.

He added that a writ petition would be filed in Punjab and Haryana High Court soon if the DC fails to give any satisfactory reply.

Meanwhile members of a committee have said that a march would be held toward Indian parliament in Delhi on August 4 demanding discussion on the release of Sikh political prisoners in both houses of Indian Parliament. They said that they had decided to move forward with their protest as their ultimatum to the state government regarding release of recently arrested members and supporters of the Sangharsh committee ends on Aug. 04.

Sangharsh Committee member Bhai RP Singh told Sikh Siyasat News (SSN) over phone that a massive protest would be held on August 6 outside Dayanand Medical College and Hospital in Ludhiana.