Ludhiana: Ravinder Jeet Singh Gogi, son of Bapu Surat Singh Khalsa, has accused the Punjab police for unduly harassing him. He has alleged that Mullanpur SHO made an attempt to arrest him last evening.

“A police party led by Mullanpur SHO arrived at our house at around 5:30 pm yesterday (Aug. 07). SHO wanted to me to accompany them to the police station but when I asked him to show arrest warrants he could not show any documents”, Ravinder Jeet Singh told Sikh Siyasat News (SSN) over phone adding: “… after this the police left our house”.

Ravinder Jeet Singh reportedly told a Punjabi vernacular Rozana Pehredar that the police also asked him to surrender his passport. 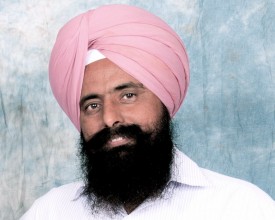 He told SSN that his father has resumed intake of water and limewater. He said that Bapu Surat Singh was determined to continue with struggle for release of Sikh political prisoners.

Meanwhile, the deadlock between Sikh organisations and the Punjab government over the issue of Sikh political prisoners continues. Sources said that there were no talks on this issue since the negotiations broke on July 21.

Sangharsh Committee member and Akhand Kirtani Jatha leader RP Singh confirmed that there were no fresh proposal or negotiations from the side of government. He said that many leaders of the Sangharsh Committee were put behind the bars under so-called preventive detention by the government and they were still in jails.

“We will deliberate on current situation on August 9 meeting” he added.