Ludhiana: Bapu Surat Singh Khalsa’s fast unto death for the release of political Sikh prisoners is getting massive response from Sikh masses across Punjab. More than one lakh Sikhs have expressed solidarity with Bapu Surat Singh’s struggle in last 15 days by signing a support declaration. 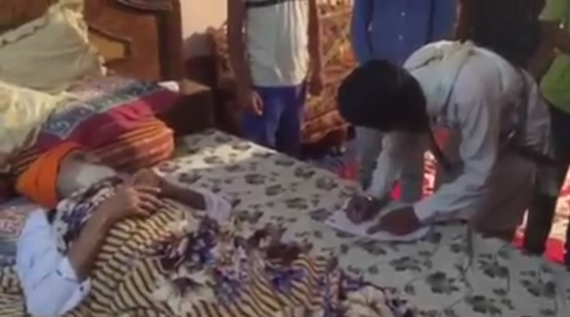 Sangharsh Committee coordinator S. Gurdeep Singh Bathinda told Sikh Siyasat News (SSN) over phone that decision to record written support from masses was taken in a meeting at Hassanpur. He said more than one lakh people has expressed their support to Bapu Surat Singh Khalsa so far.

A series of Vangaar Marches:

The Sangharsh Committee has reportedly decided to hold a series of ‘Vangaar marches’, including a march from Akal Takhat Sahib (May 25), Takhat Kesgarh Sahib (May 27) and Takhat Damdama Sahib (May 29). All these marches will conclude at Bapu Surat Singh Khalsa’s native village Hassanpur in Ludhiana district.

Gurdeep Singh Bathinda told SSN that railway tracks connecting Amritsar-Delhi junctions will be blocked on May 31st for two hours (from 12pm to 2pm) to protest against inaction of Punjab and Indian government in the case of Sikh political prisoners.

It is notable that Bapu Surat Singh Khalsa is on fast unto death from 129 days seeking release of political Sikh Prisoners who have already served their mandatory terms. Police kept him on force-feeding through feeding tube for about two months at the Civil Hospital in Ludhiana. He was released by the police on April 24 after the members of Struggle Committee approached President of India.