#BastarBlackout: Repression of media and civil society in Chhattisgarh deepening

New Delhi: Over the last six months, human rights defenders in Bastar, Chhattisgarh have faced a relentless crackdown by the police and self-styled vigilante groups, leading to a near-total information blackout in the state, Amnesty International India said today.

‘Blackout in Bastar: Human Rights Defenders Under Threat’ describes how journalists, lawyers and activists have been harassed, attacked and locked up for investigating excesses by security forces and seeking justice for human rights abuses.

“Over and over again, Chhattisgarh authorities have stood by and watched as their critics are intimidated and attacked by groups which seem to enjoy police support,” said Aakar Patel, Executive Director, Amnesty International India. 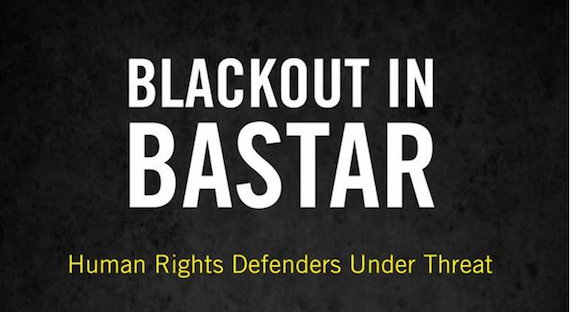 “Even worse, the police have themselves arrested journalists on trumped-up charges. The ominous message the state government is sending to defenders is clear: shut up or face the consequences.”

Four journalists – Santosh Yadav, Somaru Nag, Prabhat Singh and Deepak Jaiswal – have been arrested on politically motivated charges since July 2015. Another journalist – Malini Subramaniam – was forced to leave her home in February 2016 following attacks on her home and police pressure on her landlord.

Kamal Shukla, the editor of Bhumkal Samachar, a Bastar newspaper, said, “We are always reminded by the state police that our lives will be in danger if we don’t follow the government narrative. And now we have these vigilante groups backed by the state that just makes it difficult for independent journalists to work in Bastar.”

In February, Adivasi activist Soni Sori had a chemical substance thrown at her face by unknown assailants who warned her not to file a complaint against a high-ranking Bastar police official for an alleged extrajudicial execution.

Human rights lawyers of the Jagdalpur Legal Aid Group, which provides free legal aid to Adivasi pre-trial detainees, were also forced to leave their home in Jagdalpur in February following police pressure on their landlord.

Isha Khandelwal, a lawyer from the group, said, ‘Chhattisgarh has become like a police state now. What the police can’t do legally they make these vigilante groups and what’s really worrying is that these vigilante groups openly and blatantly threaten and harass people. Chhattisgarh has become a very dangerous place for those who question the government.”

“The state police continue to use abusive laws like the Unlawful Activities Prevention Act and the Chhattisgarh Special Public Security Act to stifle the right to freedom of expression,” said Aakar Patel.