Bradford/ London: An outrageous incident of beadbi of Guru Granth Sahib Ji is reported from Bradford in England. As per reports the unidentified culprits used a can during night time and threw a Saroop of Guru Granth Sahib outside the Bradford Gurdwara Sahib. The police were reportedly investigating the CCTV footage.

Sikh Council UK has requested “calm and solidarity by members of the Sikh Community while due process is being followed in getting to the bottom of the matter and for those responsible to be held accountable”. 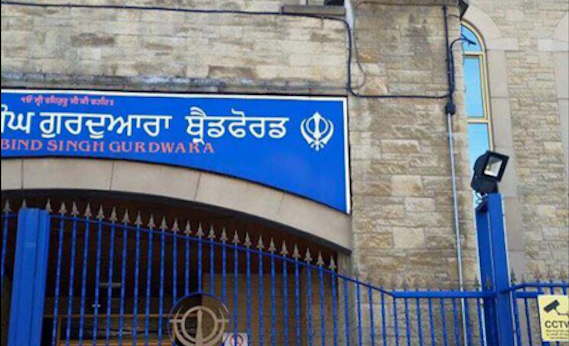 The Sikh body said that its Secretary General is in liaison with Pardhan/committee of Gurdwara Sahib and Satkar Committee in which the following actions have been confirmed:

· Following mutual agreement; Satkar Committee are already on-route to pick up Sri Guru Granth Sahib Ji from Guru Gobind Singh Gurdwara Sahib, Bradford in order to start the work of restoration. We have been advised that the main damage is to the outside cover and that the angs are intact.

· CCTv camera footage has been recovered from the Gurdwara Sahib which as already stated shows a hire vehicle company vehicle was used but the number plate and the face of the individual are not visible. Police are also studying all CCTV cameras in the area for further visuals and track the vehicle and driver/s.

· Police have been made aware of the seriousness of the issue for Sikhs and confirm their understanding of the entity of Sri Guru Granth Sahib Ji to Sikhs.

· Meeting is taking place between Gurdwara Committee and senior police officers to ascertain any further information that will assist in resolving this case.