Malerkotla, Punjab: An incident of beadbi of Guru Grath Sahib is reported from village Hathoa near Malerkotla. The incident was reportedly first noticed the Granthi of Gurdwara Sahib who in early hours on Sunday (May 12) found that the lock of the gate of Gurdwara Sahib was broken and smoke was coming out from the Gurdwara Sahib. He informed Gurdawara president. It was found that the Palki Sahib and Saroop of Guru Grath Sahib was burnt in fire. It is said that the Saroop was there in the Palki, whereas normally the Saroop is taken to the Sukh Aasn Asthan after the Sukh Aasn. The villagers and Granthi managed to control the fire. They also informed the police about the incident. 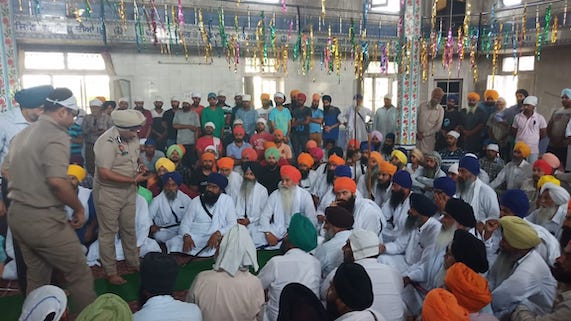 A view of gathering at the Gurdwara Sahib after the incident

With the rise of the day news about the incident spread and more people started visited the Gurdwara Sahib. Police IG A.S. Roy along with local SSP and other officials also reached there.

It is notable that the place of occurence was washed with water and police did not make any effort to keep it intact to collect the possible evidence. 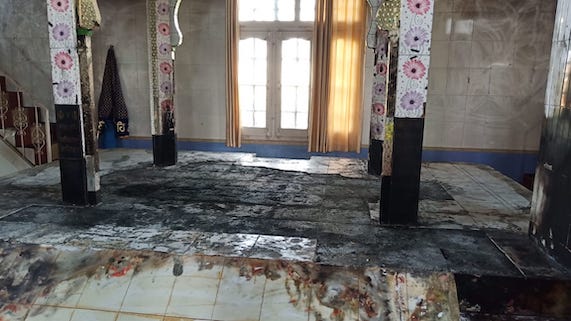 A view of Palki Asthan after the incident

Sources who were present at the Gurdwara Sahib told Sikh Siyasat News (SSN) that the villagers tried to convince the gathering to ‘Jal-Parvah’ the affected Saroop of Guru Granth Sahib but the Sikh sangat opposed the proposal.

During all this even heated arguments took place between group of villagers and representatives of Bargari morcha.

Later it was decided that the affected saroop will be kept at ‘Sukh Aasn Asthan’ and Sikh bodies would move from Gurdwara Sahib to the Langar Hall building to allow police to carry out its investigations.
The incident has triggered outrage in the Sikhs.

The villagers have said that their village was a peaceful village and they were shocked by the incident. They said that they put faith in the police and the police should find the culprits but it the police fails to do so then they may decide to boycott the upcoming Lok Sabha polls.