Washington: An incident of grave beadbi of Guru Granth Sahib is reported from Spokane in the United States. In what can only be described by an appalling and sickening act, a naked male identified as 44 year-old Jeffrey C. Pittman broke into the Spokane Sikh Gurdwara on Baker road and vandalised the premises, destroying; furniture, musical instruments, walls, but more disturbingly desecrating the Sikh sacred scriptures by tearing apart a Saroop of Guru Granth Sahib Ji.

In the early hours of the morning the perpetrator was confronted by sangat and a short altercation occurred as the man was running around the premises with ceremonial swords he had taken from the main darbar sahib.

Cops were called to the scene and arrived at 5.45am the took away the J.Pittman who had been restrained after causing over $35,000 worth of damage. Investigation revealed the man had broke in to the building which used to be a church from the side entrance.

“Our hearts are broken,” said Subarna Nagra, a member of the temple. The Sachkhand of Guru Sahib Ji was also violated and damaged. 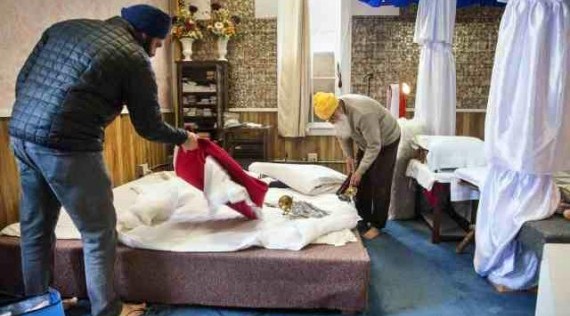 As per media reports Spokane community leaders on Thursday denounced religious hate crimes after the Sikh Gurdwara of Spokane was vandalised by a man who reportedly “mistook” the Gurdwara Sahib was a mosque affiliated with the ISIS.

Spokane County Sheriff Ozzie Knezovich was joined by two mayors, three city council members and representatives of other faiths in condemning the desecration Wednesday night and early Thursday of the temple at 1420 N. Barker Road.

“No hate will be tolerated in Spokane County,” Knezovich said at an afternoon press conference at the temple’s community building.

Knezovich said Pittman told investigators he broke into the mosque through a side door because he was cold and hungry.

Once inside, Knezovich said that Pittman became convinced the Gurdwara was a mosque connected with ISIS.

Pittman was booked into Spokane County Jail on charges of armed burglary, malicious mischief and malicious harassment based on religious discrimination – Washington’s version of a hate crime.