Dal Khalsa said in a press release that “heavy Rain fails to dampen the spirit of Sikh Sangat that thronged in large numbers at venue to lend its support. Activists raised slogans in favour of their demands”.

Dal Khalsa team members under the leadership of party head Harpal Singh Cheema today participated in the sit-in protest at Bargarhi launched 30 days ago to seek justice for Behbal Kalan victims beside release of political prisoners. 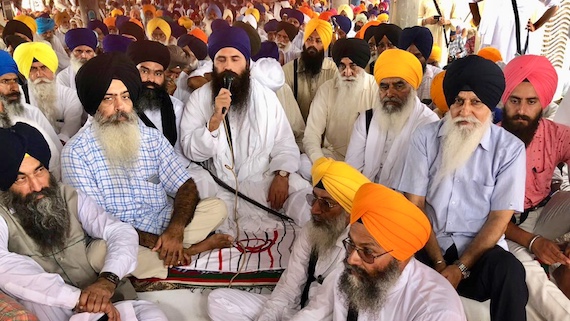 Advocate Harpal Singh Cheema while talking with media said the human rights violator and infamous DGP SS Saini who retires today was the main culprit who ordered unprovoked firing on peacefully protesting Sikhs. He said Saini was darling of Badals who shielded him despite his poor record of rights abuses. Ironically, the present rulers too have adopted soft approach towards him.

Party leaders said it’s almost four weeks that a section of the state’s population were protesting through a sit-in demonstration at Bargarhi to bring the culprits of Bargarhi and Behbal Kalan to book. Yet the government’s approach is thoroughly non-serious and casual. None of the demands of the agitators has been accepted. “We hope that the people of Punjab will get to see the findings of Justice Ranjit Singh Commission on sacrilege incidents, which is expected to be out in a day or two”, said they.