Chandigarh: Justice (retd) Zora Singh commission of inquiry held its proceedings in Behbal Kalan police firing incident yesterday. Thirty two witnesses from Behbal Kalan and other villages of Faridkot district deposed before the commission. Justice Zora Singh Commission was appointed by the Punjab government in October 2015 to hold an inquiry into the death of two Sikh youths in police firing near village Behbal Kalan village on October 14 last year.

The eye-witnesses of the police firing incident included seven persons who had sustained bullet injuries during this incident. Eyewitnesses have reportedly named specific police officers who were allegedly involved in the police firing. 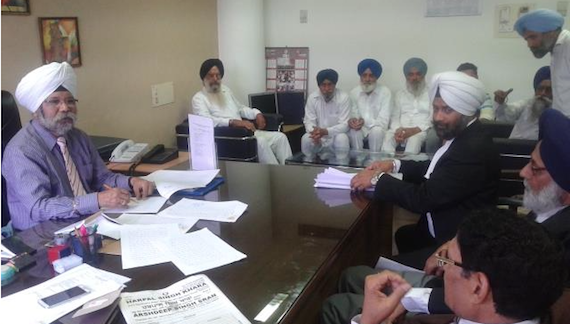 The presence of these officers on the scene is established already in the first-information report (FIR) lodged against the protesters on October 14.

The name of the-then Moga SSP, Charanjit Sharma, figures in another FIR related to the two deaths, which was lodged a week after the incident — on October 25, 2015.

The witnesses have accused police of opening fire on the “unarmed protesters” from 15 to 20 feet on October 14.

The Moga SSP had kicked some of the women protesters on the link road, a few metres from the Kotkapura-Bathinda highway, they alleged.

Angrez Singh, who had taken a bullet in the arm, said Faridkot police had threatened them not to go before the commission.

Villagers have maintained that cops had burnt police vehicles, besides their tractor-trailers and bikes, while retreating after two deaths in police firing.

It may be recalled that Justice Zora Singh had last month visited Faridkot and Moga, asking the witnesses to come to Chandigarh with their affidavits.

Notably witnesses had also deposed before before an independent commission of inquiry led by Justice (retd) Markandey Katju in January. Markandey Katju is heading one member People’s Commission requested by some human rights organisations of Punjab. Justice Katju commission is expected to make public it’s findings in coming weeks.