Chandigarh: A news report narrating the Police excess at Behbal Kalan village near Kapurthala on October 14 has appeared in Oct. 16 Indian Express (IE). The news reported by Divya Goyal is published on IE website. It shows that how the police did not even allow the Sikhs to pick up two Sikhs who had fell to police bullets. The story told by eyewitnesses to the Indian Express, as reported in the newspaper, is similar to police firing at Gurdaspur on 29 March, 2012 in which a Sikh youth Jaspal Singh Gurdaspur had died while another (Ranjit Singh) was seriously injured.

In his inquiry report into Gurdaspur firing (2012) a senior Punjab Police officer S.L. Laddar had questioned use of sophisticated weapons such as SLR and AK 47 to “disperse” a demonstration. But according to Kotkapura police’s own FIR (no. 192, dated: 14/10/2015) against Sikh protesters, the police personnel deployed at Kotkapura chowk were in possession of SLR weapons. 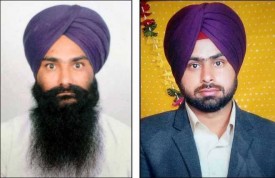 Sikh Siyasat News is yet to access the post mortem reports of Krishan Singh and Gurjeet Singh, who were killed in police firing at Behbal Kalan, so no authentic description of the weapons used by the police was available at the time of writing this report. According to some newspaper reports the police fired more than two hundred bullets at Behbal Kalan.

Sikh Siyasat News (SSN) has decided to reproduce the news reported by Divya Goyal for Indian Express in verbatim. SSN extends its courtesy to both Divya Goyal, the author and the Indian Express (original publisher). For the convenience of readers we have provided the source url at the bottom of this content and the readers may visit that url (link) to read the report at its source page.

Faridkot: Firing never stopped, even when we picked up our dead, say eyewitnesses

We saw police burn the vehicles and that too after opening fire on us but who will believe us,” said an eye witness.

“Protesting Sikhs at Behbal Kalan village in Faridkot on Tuesday alleged that police did not stop shooting even when they attempted to rescue the two men who fell to the bullets. “For over two hours after the lathicharge and firing, the two lay on the road. When we attempted to pick them up, police would start firing. We even signaled to them, with our hands up, to let us attend to those who were hit by the bullets but police just did not stop firing,” said Lakhwinder Singh of Sarawan village, whose friend Gurjit Singh died on Tuesday.

The other victim was Krishan Singh of Naimiyewala village. His friend, Bant Singh, who tried to save him, was also hit by a bullet in his thigh and is now undergoing treatment.

The protesters also questioned as to why similar action was not taken when Dera Sacha Sauda followers sat on protest demanding the release of the film, MSG-2. “The police’s patience ended in just a day of our protest. In their case, it was all fine and no bullets were fired; no one died. They can protest but we can’t. It is all a dirty game of politics. They first pardon the dera head and now this brutal action on protesting Sikhs,” said a protester.

Protesters at Behbal Kalan also alleged that police themselves torched the three official vehicles. “It was to give themselves a good reason to show as to why they opened fire. They will say that it was after we torched their vehicles.

We saw police burn the vehicles and that too after opening fire on us but who will believe us,” said an eye witness.

“They made us run for up to 1 km from the protesting site and later torched their own vehicles,” said another eye witness to The Indian Express.”