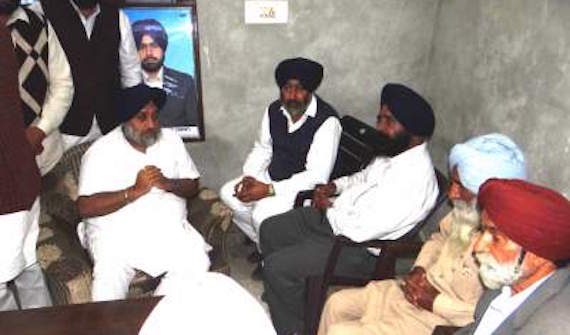 It is notable that the SGPC had yesterday given Rs. 10 lakh “relief” cheques each to both the families. The cheques were given by leaders of the ruling party along with SGPC representatives.

Earlier today when a news channel air a news about Sukhbir’s expected visit to both the village, people hosted black flags on their rooftops to show their protest against the ruling party.

Many Sikh activists gathered at Sarawan and Niamiwala village to show black flags to Sukhbir Badal. The demonstrators accused the Punjab government of protecting the police personnel involved in police firing that had resulted in death of Bhai Gurjeet Singh and Bhai Krishan Bhagwan Singh.

Sukhbir Badal’s visit is considered to be part of ruling party’s appeasement and damage control strategy. The anger against the ruling party had went to peak after Behbal Kalan police firing and people had started opposing ruling party leaders during their public appearances.

The anger against the Badal Dal leaders still prevails but the ruling party is trying to snub the opposition by arresting, detaining or otherwise preventing the protesters besides holding public meetings as an attempt to boost confidence of the party leaders and workers.