Ludhiana: Several opposition leaders were today detained by Ludhiana police when they sat on a dharna along with local jewellers on G T Road near Ladhowal. Leaders of Congress and the Aam Aadmi Party were supporting the demand of the jewellers protesting the imposition of one per cent excise duty on non-silver jewellery. 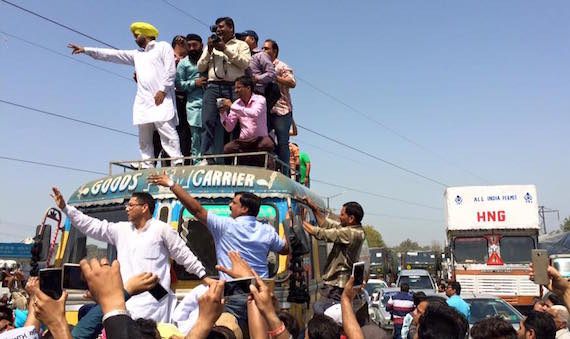 Deputy Commissioner of Police (DCP) Narinder Bhargva said no one was arrested.

Aam Adami Party MP Bhagwant Mann, who also made an attempt to address the demonstrators, was also detained by the police.

The police also used force to clear the road blockade created by the protesters. Ludhiana District Congress Committee (DCC) president Gurprit Gogi said some Congress workers were said to have received injuries in the police action.