Chandigarh: In a written release issued yesterday the Aam Aadmi Party (AAP) said it’s Member of Parliament (MP) Bhagwant Mann on May 09 forcefully raised the issue of ‘loot’ by the private schools in Punjab on the floor of Lok Sabha and sought intervention of Ministry of Human Resources Department (MHRD) to curb the ‘high-headedness’ of private schools. He said that due to the huge amount of fee of private schools, the parents are unable to provide education to their children.

In the presence of union Human resource minister, Smriti Irani, the Sangrur parliamentarian explained how the private schools in Punjab were forcing parents to cough up huge hiked amount of admission fee. He said that in the absence of quality education in government schools the parents are forced to go by rules set by the private schools. They were being forced to buy uniforms and books from some particular shops to mint money. 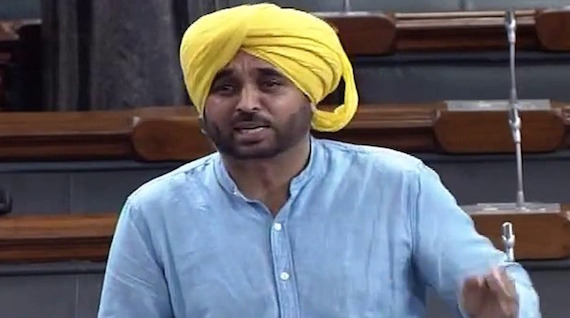 As per release Bhagwant Mann urged Union Minister of HRD, Smriti Irani to take some stern steps to chalk out a firm policy to control and regulate the functioning of private schools in entire country. Smirti Irani also took serious note of the issue and expressed her willingness to take desired steps on the issue.

“Parents in Punjab were already on roads to lodge their protests against private schools, but state government did not bother to regulate the functioning of private schools. What can be worse than protesting for getting quality education for the children?” Mann said. “If the state governments across the country follow the initiative taken by Delhi government to cut across the school fee and to refund it in case the schools have charged the extra fee then no children in the country will be deprived of the right to education.” Mann added

Bhagwant Mann said that the present trend of the saffronization and privatization of education in India is condemnable and the government at centre is responsible for this.