Firozepur, Punjab: Bhai Dhian Singh Mand was reportedly detained by the Firozepur police today (Oct. 29). Bhai Mand was declared to be the acting jathedar of Akal Takht Sahib by the organizers of November 10, 2015 Panthic gathering at Talwandi Sabo. As per a press release by Shiromani Akali Dal Amritsar (Mann), Bhai Mand was earlier detained at Firozepur Civil Lines. He was later shifted to his residence at village Saide Ke Ruhela also located in Firozepur district.

S. Simranjeet Singh Mann said in this statement (copy available with the Sikh Siyasat News) that Deputy Commissioner of Bathinda has declined to grant permissions to hold November 10, 2016 gathering at Talwandi Sabo. 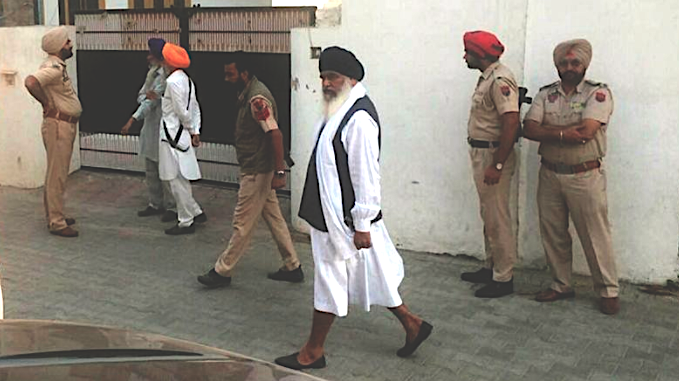 Accusing Sukhbir Badal and Badal government for conspiring to sabotage the Nov. 10 gathering at Talwandi Sabo, S. Mann said that Badals should know that Article 19 and 21 of the Indian constitution grants right to all religions and communities to live freely.

Simranjeet Singh Mann said that he was hopeful that after receiving his email Sukhbir Badal would direct Firozepur SSP to release Bhai Dhian Singh Mand and grant permissions to hold November 10, 2016 gathering at Talwandi Sabo. He urged Sikh masses to raise their concerns with Sukhbir Badal via email ([email protected]) or phone calls (at 0172 – 2746383).

Notably, as per tradition Akal Takht Jathedar delivers a message to the Sikh panth on the eve of Bandi Chhor Dihara from Darshani Deodi of Darbar Sahib Amritsar. Bhai Dhian Singh Mand had announced to deliver his message from on Sunday (Oct. 30). He is reportedly placed under house arrest to prevent his from holding the ceremony.

SGPC appointed ‘jathedar’ Giani Gurbachan Singh is scheduled to address the Sikh Sangat from Darshani Deodi of Darbar Sahib today. However, various Sikh organisations are up in arms against him, claiming that he has been rejected by the Sikh panth.