New York: International Centre for Advocates Against Discrimination ICAAD is reportedly representing, on appeal, a Sikh political activist in India who is seeking damages in U.S. Courts from the Government of India and Punjab Police for being tortured while in police custody.

Bhai Kulvir Singh Barapind, with assistance of an NGO named the Sikh Alliance, is seeking remedy based on an extradition agreement between the U.S. and Indian governments, which explicitly stated that he would not be tortured under the Convention Against Torture (CAT).

Information released by ICAAD notes that Bhai Kulvir Singh Barapind has been the victim of torture in India multiple times in the past three decades as a result of his peaceful political activity. Bhai Barapind was first arrested in 1989. During that arrest and multiple arrests that followed, he and members of his family were subjected to torture by the Punjab Police andIndian Security Forces, prompting Kulvr Singh Barapind to flee India and seek asylum in the United States in 1993. From 1993-2006 he remained in immigration detention, while pursuing his claim for asylum and vigorously opposing his extradition to India, where he faced 11 terrorism-related charges.Following his extradition, premised on the agreement not to torture Bhai Barapind, he was tried and acquitted of all charges and freed in 2008. In 2011 he returned peacefully to the political scene, which resulted in his being arrested again in 2012, again on false charges that he would later be acquitted of in 2014. 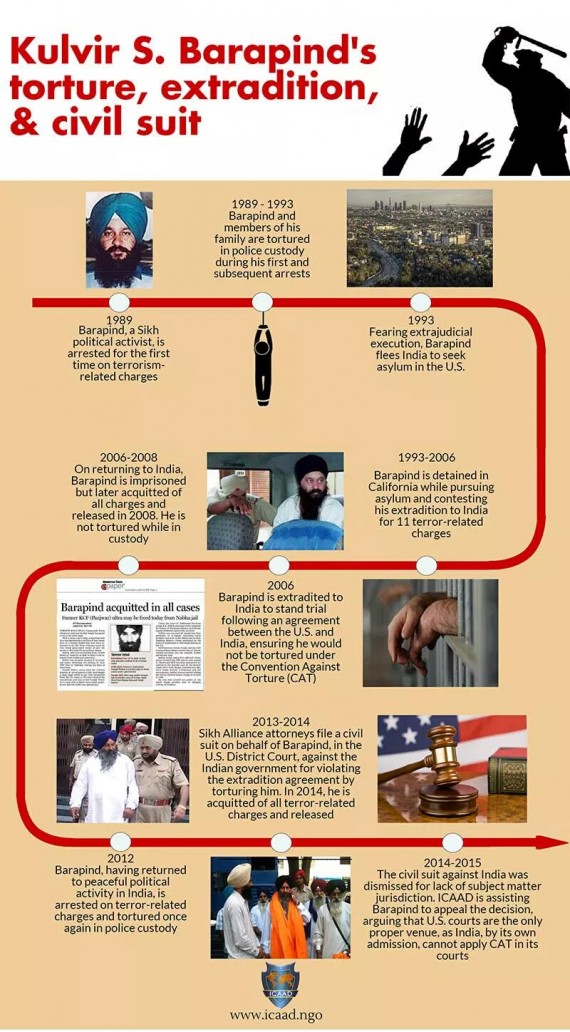 He was tortured while in custody in 2012, suffering beatings, having his legs pulled apart to 180 degrees, having electric shocks applied to his earlobes, and being subjected to verbal abuse. In 2013, Bhai Barapind filed a civil suit with the help of the non-profit Sikh Alliance in U.S. District Court. Initially dismissed on grounds of India’s sovereign immunity, ICAAD has been working with Bhai Barapind and the Sikh Alliance to appeal the decision.

At the District Court, legal experts for the Government of India declared that as India has not ratified CAT that it would violate the Indian Constitution to apply CAT. Hence, Bhai Barapind is arguing that “Given that the Agreement was negotiated…to protect Barapind’s constitutionally protected rights under the Convention, only the United States courts can apply its provisions.”

Should Bhai Barapind and ICAAD be successful in this case, it would set an important precedent for governments to be held accountable for torture in similar extradition cases. Additionally, it will bring much deserved justice and compensation to Kulvir Singh Barapind for his suffering at the hands of the Punjab Police and Indian Security Forces, and hopefully strengthen the call for the adoption of the proposed Prevention of Torture Bill and for the ratification of CAT in India.