Bhai Panthpreet Singh, Baba Dhadrianwale released by Police along with other Sikhs

Faridkot/ Patiala: The Punjab police today released Bhai Panthpreet Singh, Bhai Ranjit Singh Dhadrianwale along with other Sikhs who were arrested in relation to demonstrations against sacrilege of Guru Granth Sahib at village Bargari. Initally they were booked for (alleged) attempt to murder by the police (see FIR copy). 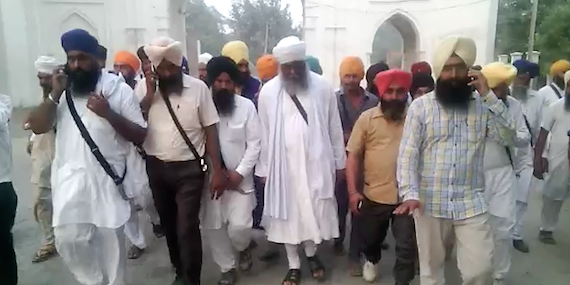 Bhai Panthpreet Singh after being released by the police

These Sikh pracharaks and the Sikh sangat were released unconditionally hours after the Punjab Deputy CM Sukhbir Badal, who also holds the Home Ministers in the state government, announced to withdraw all cases against the Sikhs.

Whereas Bhai Panthpreet Singh was released from Faridkot police’s custody, Bhai Ranjit Singh was reportedly released by the police his Gurdwara Prameshwar Dwar on Patiala-Bhawanigarh Road.