New Delhi: Around seven people were reportedly killed in Madhya Pradesh, Rajasthan and Uttar Pradesh as a result of a clash between Dalit outfits and police during Monday’s Bharat Bandh (Dalit agitation). The Dalit groups across India protesting a controversial order passed by Supreme Court of India (SCI) which supposedly dilutes law protecting the rights of SC/ST people. 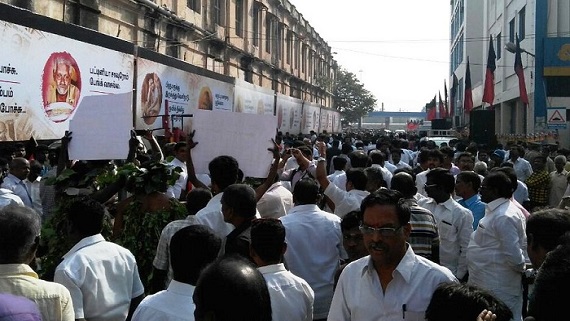 The violence in Gwalior district, Bhind, Morena and Sagar towns occurred when Dalit groups were taking part in ‘Bharat bandh’ to protest the court’s March 20 interpretation of The Scheduled Castes and Scheduled Tribes (Prevention of Atrocities) Act 1989.

SCI on March 20 had banned automatic arrests and registration of criminal cases under the Scheduled Castes (SC) and the Scheduled Tribes (ST) Prevention of Atrocities Act, 1989, a legislation meant to protect the marginalised communities from abuse and discrimination.

A bench of Justices AK Goel and UU Lalit ruled that no arrests can be made under the act without prior permission. It also held that a court can grant a pre-bail arrest (anticipatory bail) if it, prima facie, finds the complaint is an abuse of the law, false, motivated and intended to blackmail or harass a person, notes Hindustan Times (HT).

Central Government today reportedly filed a review petition on the Supreme Court India (SCI) judgment on the SC/ST Act. However, SCI declined an urgent hearing on a plea which sought a stay and review of its recent verdict on SC/ST Act.

“We are closely monitoring the situation in the wake of Bharat bandh protests,” a spokesman of Union Home ministry reportedly said.

“Anti-social elements were sent to cause violence during the protests resulting in death of some people and damage to public property” BSP chief Mayawati said while interacting with the media.

“One can understand if people protest, but why is Opposition (Congress) playing politics? Parties like Congress who did not give Bharat Ratna to BR Ambedkar, and are now acting like his followers,” reads the quote from the statement of Ram Vilas Pasawan published in an English vernacular.

Eight killed across the states amid Bharat Bandh

Six people were killed in Madhya Pradesh and one each in Rajasthan and Uttar Pradesh. IG Law and Order Makrand Deuskar told media. Media sources reported that curfew had been imposed in Morena. In Madhya Pradesh, curfew was also imposed in parts of Gwalior and Section 144 (prohibiting assembly of more than four people in the area) in Sagar, notes Business Standard (BS).

The northern Punjab state, with a sizeable Dalit population, suspended internet services until 11pm (17:30 GMT) on Monday and has requested the army to remain on standby, according to the Indian Express (IE) newspaper. Internet services was also suspended in Rajasthan state.

Protests have also been organised in the states of Haryana, Uttar Pradesh, Gujarat, Maharashtra, Rajasthan, Bihar and Jharkhand.

“MHA is closely monitoring the situation and is in constant touch with states. Whichever state has asked for Central Forces, they have been made available immediately,” a spokesperson of Home Ministry purportedly said.

It is reported by the media sources that the protesters of ‘Bharat Bandh’ resorted to stone pelting in Madhya Pradesh’s Bhind, Visuals of the ‘Bharat bandh’ protests from MadhyaPradesh’s Morena over the SC/ST Protection Act showed protesters blocking a railway track.

According to the reports Protesters were also thrashed by police personnel in Meerut. Clashes took place between ‘Bharat bandh’ protesters and the police on Monday in Jharkhand’s Ranchi.

As reported by the media sources during the ongoing ‘Bharat Bandh’ protest some unidentified anti-social elements resorted to violence across Ferozpur Cantonment and Ferozpur city. It it is reported that the trains standing at Ferozpur railway station were vandalized by the protesters. The city witnessed complete bandh today.

Clashes Between Protesters and Local Traders At Pathankot