The recent arrest and detention of five Dalit and Adivasi rights activists for alleged “terrorism-related offenses” appears to be politically motivated, the human rights bodies said.

“This is not the first time that activists working on Dalit and Adivasi rights have been arrested with little evidence,” said Aakar Patel, executive director of Amnesty International India. “The government should protect people’s rights to freedom of expression, association, and peaceful assembly instead of creating an atmosphere of fear”, he added. 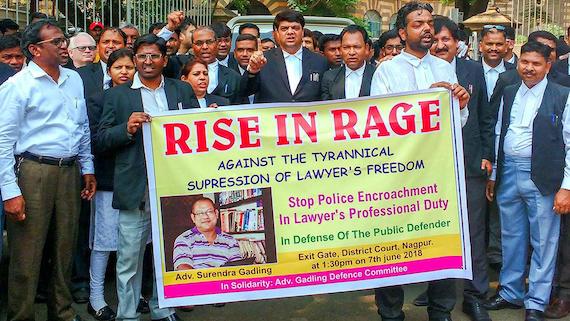 Hundreds of Dalits, formerly “untouchables,” had gathered in Bhima Koregaon on January 1 to commemorate a 200-year-old battle in which Dalit soldiers of the British army defeated the ruling Peshwas. Right-wing nationalist groups and alleged supporters of the ruling Bharatiya Janata Party (BJP), some carrying saffron flags, objected to the celebration, calling it anti-national because it celebrated a colonial victory. One person died in the clashes and several were injured. The organizers of the Dalit march said that they wanted to open a campaign against the pervasive ideology in India that leads to attacks on Dalits and Muslims.

Gadling, one of those arrested, is in police custody. The others have been sent into judicial custody until 4 July. They could be detained without charge for up to six months under the UAPA. If convicted, they could face life in prison.

The activists have worked for years to defend the rights of some of India’s poorest and most marginalized communities, including Adivasis, as some tribal groups like to call themselves, and have been vocal in their criticism of government policies. Dhawale, 54, is a Mumbai-based Dalit activist and editor of the magazine Vidrohi. Gadling, 47, is a Dalit human rights lawyer and general secretary of Indian Association of People’s Lawyers.

Raut, 30, a former Prime Minister Rural Development fellow, is a land-rights activist whose work includes mobilizing people at local levels to ensure they are part of decision-making processes in areas affected by mining projects. Sen, 60, is a Dalit rights and women’s rights activist who was head of the English department at Nagpur University. A week after her arrest, the university suspended her because she had been detained by the police. Wilson, 47, is a Delhi-based social activist and member of the Committee for Release of Political Prisoners, which has campaigned against the UAPA and other repressive laws. The five activists are facing allegations under the UAPA. They are also suspected of promoting enmity between groups and criminal conspiracy under the penal code. The arrests were based on a police complaint filed by a Pune-based businessman on January 8, in which Dhawale was named as a suspect. The other four were not named in that First Information Report.

The authorities have also named nine other people in the case, several of them members of Kabir Kala Manch, a Pune-based cultural group of singers, poets, and artists. The group, largely consisting of Dalit youth, uses music, poetry, and street plays to raise awareness about issues such as oppression of Dalits and tribal groups, social inequality, corruption, and Hindu-Muslim relations. The police contend that Dhawale and Kabir Kala Manch members sang objectionable songs, and created a sense of enmity among the public with aggressive, provocative speeches on 31 December 2017, allegedly inciting the violence the next day at Bhima Koregaon.

While seeking custody of the five activists, the police told the court that the activists had held the event on 31 December 2017 at the behest of and funded by the banned Communist Party of India (Maoist), an armed anti-government group, and that their actions were “anti-national.” The police also stated that they had found pamphlets, CDs, and books in the activists’ homes indicating that they had carried out transactions and arranged meetings for the Maoists, which the police said amounted to participation in illegal activities.

Two days after the arrests, the police said they had seized a letter on Wilson’s laptop that mentioned a plot to assassinate Prime Minister Narendra Modi. Supporters of the activists asserted that any such letter was fabricated.

“The police in India have frequently used laws like UAPA to target critics of the government and social activists, particularly those acting on behalf of marginalized communities,” said Meenakshi Ganguly, South Asia director at Human Rights Watch. “The authorities should follow Supreme Court directives not to punish ideological support for a movement and to protect freedom of expression.”

Several Dalit and tribal activists in Maharashtra, including Dhawale and members of Kabir Kala Manch, have been previously arrested on similar accusations. In 2011, six members of Kabir Kala Manch were arrested under the UAPA. In January 2013, the High Court in Mumbai ruled that membership in an illegal organization should be interpreted in the light of fundamental freedoms such as rights to free speech and expression, and that “passive membership” was insufficient for prosecution.

Dhawale was also arrested in 2011 under the UAPA and for sedition, but was acquitted after spending 40 months in prison. The acquittal judgment noted that the police had failed to comply with legal procedures for arrest, seizure and collection of evidence. The court noted: “How can highlighting the wrongs prevalent in the society, and insisting that there is a need to change the situation, be considered as evidence of they being members of a terrorist organization?”

Despite these judgments, in March 2017, G. N. Saibaba, an activist and teacher, was convicted under the UAPA on the basis of documents and videos found in his home, which a court ruled was evidence that he was a member of a Maoist front organization. He has appealed to the Bombay High Court.

Amnesty International India and Human Rights Watch have repeatedly urged the Indian government to ensure that any restrictions on organizations do not violate the rights to freedom of expression, association and peaceful assembly under international human rights law. They have also urged the repeal of the Unlawful Activities (Prevention) Act, whose provisions use vague and overbroad definitions of “terrorism,” authorize pre-charge detention for up to 180 days including 30 days in police custody, place limitations on bail, and presume guilt in certain circumstances.

“Instead of targeting those who speak out for the rights of the marginalized and against state abuses, the government should address the grievances of the affected communities,” Ganguly said.