Ludhiana: Ludhiana resident Amrik Singh has written an open letter to Chief Minister Parkash Singh Badal, seeking justice. Amrik Singh is father of Avtar Singh Gola, who was shot by police cat turned cop Gurmeet Pinky in 2001. Pinky was sentenced to imprisonment for life in this case in 2006, but he was prematurely released by Punjab government in May 2014. 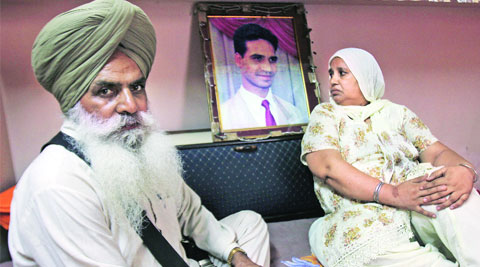 Charanjit Kaur and Amrik Singh with picture of their son Avtar Singh, who was allegedly killed by Gurmeet Pinky

He said even though he had been running from pillar to post for the past 15 years, he failed to get justice.

Amrik Singh said he had already approached the Punjab and Haryana High Court when Gurmeet Pinky was released prematurely by the Punjab government.