UP & Bihar By-Election: Ahead Of 2019 General Elections, BJP Loses All Lok Sabha Seats

New Delhi: As per the media reports the ‘pro-hindutva’ Bhartiya Janata Party (BJP) on Wednesday suffered a major set back in the its hindi heartland base, as it lost both the Lok Sabha seats in Uttar Pradesh  to the Opposition Samajwadi Party and one Lok Sabha and state assembly seat in Bihar to Rashtriya Janata Dal (RJD). 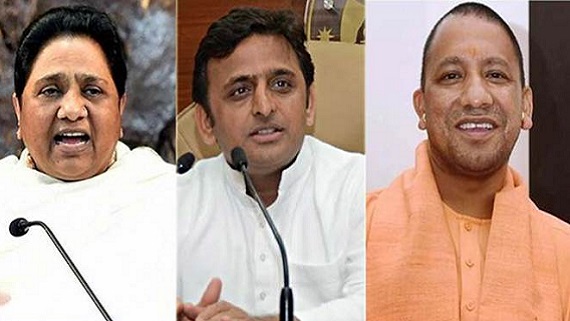 From (L) to (R) Mayawati, Akhilesh Yadav and Yogi Adityanath.

In a humiliating defeat the BJP suffered a setback in the home turf of Chief Minister Yogi Adityanath while losing Deputy Chief Minister Keshav Prasad Maurya’s constituency too. Samajwadi Party candidates have clinched a win in both Gorakhpur and Phulpur constituencies of Uttar Pradesh.

The on-going by-election became more intriguing when Mayawati lead Bahujan Samajwadi Party (BSP) decided to back and campaign for Samajwadi Party candidates to defeat the BJP.

Similarly, the Bihar’s regional RJD led Grand Alliance in Bihar won the Araria Lok Sabha and the Jahanabad Assembly seats while the BJP managed to retain the Bhabhua Assembly seat in Bihar by elections. This was the first electoral battle in the Bihar since Chief Minister Nitish Kumar, who also heads the JD(U), walked out of the Grand Alliance with the RJD and the Congress and joined the BJP-led NDA last year, and was being touted as a litmus test for the new coalition.

By-election to the Araria seat was necessitated by the death of sitting RJD lawmaker Mohd Taslimuddin, from where his son Sarafaraz Alam has won against the BJP’s Pradip Kumar Singh. RJD candidate Kumar Krishna Mohan alias Suday Yadav won by 35,036 votes in Jehanabad over his nearest Janata Dal (United) (JDU) rival Abhiram Sharma.

Meanwhile, BJP’s Rinki Pandey managed to save his seat with over 15,490 votes over Sambhu Patel of the Congress, an RJD ally, in Bhabhua, notes FirstPost in its report.