New Delhi: The Aam Aadmi Party and Bharatiya Janata Party are engaged in a poster war against each other in Delhi. After Aam Aadmi party lead Delhi government put up holdings and posters in Delhi requesting the Indian Prime Minister Narendra Modi to let the distinction in the city-state work without any interference, now the BJP has come up with a number of Holdings put across Delhi questioning Arvind Kejriwal led AAP government’s expenditure on its advertisement campaign. 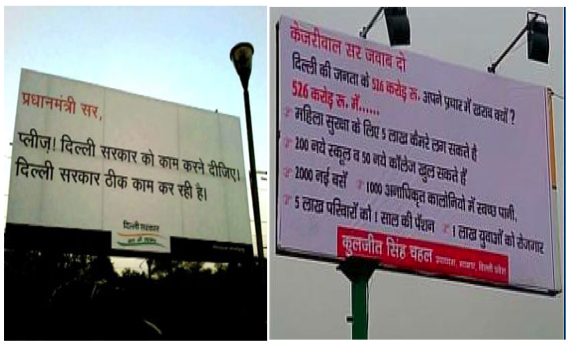 AAP and BJP Hoardings in Delhi

AAP hoardings with a message “Prime Minister Sir, Please, let Delhi government work” that were put across Delhi around 23rd of July were removed on July 28.

The AAP government had also run similar advertisements on TV channels and radio.

Notably the posters and hoardings were put up across the city after Chief Minister Kejriwal shot off a terse letter to Lt Governor Najeeb Jung on 23 July, accusing him of acting at the behest of Modi.

BJP hoardings ask why the AAP government is spending Rs 526 crore on the campaign when the money could be utilised to put up five lakh cameras for women’s security.

Arvind Kejriwal and the Aam Aadmi Party are accusing BJP and Narendra Modi for not allowing elected Delhi government to work by creating “undue interference” through Delhi’s L-G Najeeb Jung. On the other hand BJP is alleging that the AAP and Arvind Kejriwal had made false promises to the people of Delhi that could not fulfilled and AAP govt. has allegedly fabricated an excuse about interference by the Centre or BJP in Delhi government’s affairs.

Interesting BJP that used to demand full state status for the Union’s Territory of Delhi is now opposing the Delhi government’s move to secure statehood for Delhi.