Vellore: Following the Facebook post of ‘pro-hindutva’ Bhartiya Janata Party (BJP) leader H Raja, in which he had reportedly threatened to pull down the statue of Dravidian icon and social reformer EVR Ramasamy, popularly known as Periyar, the way statue of Russian communist revolutionary Vladimir Lenin was razed in Tripura – two men vandalised a Periyar statue at a municipal corporation office in Tamil Nadu’s Vellore. 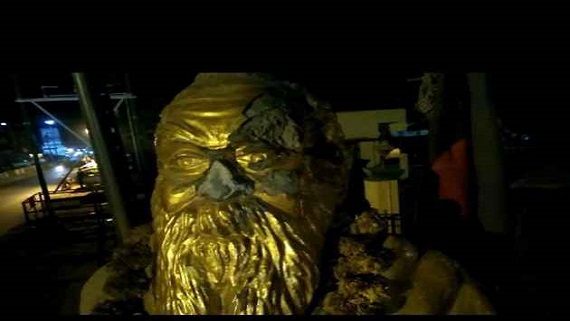 The statue of Periyar, located inside the Tirupattur corporation office in Vellore, was targeted.

The aforesaid statue located inside the Tirupattur corporation office, was targeted around 9 pm. The glasses and nose of the statue were damaged. The police have arrested two men. “One man is a BJP member and another a CPI worker, both drunk,” the police reportedly said.

At the time, as a sign of electoral victory when the statue of Lenin was being razed by the mob of BJP’s party worker, BJP’s party secretary H Raja whilst endorsing the outrage and actions of frenzy mob, responded by writing on his Facebook wall “Who is Lenin and what is the connection between Lenin and India? What connection has India with Communists? Lenin’s statue has been removed in Tripura. Today it is Lenin’s statue in Tripura, tomorrow it will be the statue of caste fanatic EVR Ramasamy”, notes NDTV in its report.

But following an angry  backlash from the people of Tamil Nadu he reportedly deleted that post from his wall. DMK working president MK Stalin has demanded the arrest of Mr Raja for his post. The MDMK, CPM and CPI have also demanded action against H Raja.

Whilst interacting with the mediapersons the BJP leader consistently maintained that it was not he but someone else who wrote that status update on his social media account. Following which the state’s BJP president Tamilisai Soundararajan had distanced the party from the controversial remarks.