Ranchi: After completely taking over the control of educational institutions in the state of Gujarat and Rajasthan the pro-hindutva political outfit Bhartiya Janata Party (BJP) and its ideological patron the Rashtriya Swayamsewak Sangh (RSS) while continuing with the hindutva agenda have reportedly asked the Jharkhand government to induct more people with pro-hindutva mindset to head educational institutions in the state, in order to catalyse the process of “saffronisation of education.”

The move is perceived as an attempt to prevent the growth of educational institutions run by Christian missionaries, who have been working in the state’s education sectors for decades. For this purpose earlier this month the state government also passed a controversial anti-conversion law named Jharkhand Religious Freedom Act, 2017 that prohibits the religious conversions in the state, media sources said.

As per its provisions, anyone found violating the legislation would be imprisoned for three years and fined Rs. 50,000 or both, and four-year imprisonment and Rs 1 lakh fine, or both, if the person converted is a minor, woman or schedule caste or schedule tribe 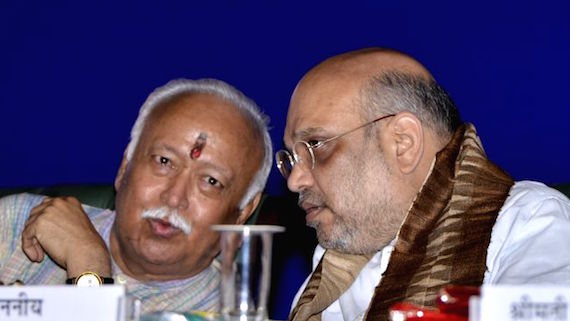 It is also reported that Raghubar Das-led BJP government earlier this year rechristened the state’s oldest “Ranchi College” to “Dr Shyama Prasad Mukherjee University”, Mukherjee is considered the founder of the Bharatiya Jana Sangha, the forerunner to the BJP.

The renaming had sparked angry protests from tribal students, who accused the government of “saffronising” higher education by suppressing students’ opinion and issuing diktats to please the RSS, all these steps are part and parcel of a bigger agenda of establishing a Hindu state dominated by the upper caste ruling elite of the sub-continent by amalgamating the distinct entities by dubbing them as part and extension of vast hindutva tree.

Furthermore, in reported meeting held at the RSS office in Ranchi’s Niwaranpur locality, also asked the government to scrap affiliation of educational institutions that are allegedly directly or indirectly engaged in religious conversion.

“The government has strong evidences against some Christian affiliate institutions, universities that are encouraging conversions. And their numbers are increasing by the day. It’s high time that the government check their growth,” reads the statement of a senior RSS official published in an English vernacular.

Pro-Christian tribal groups and opposition parties have condemned the law describing it another step by the RSS-BJP combine to victimise minorities in the state, reports Hindustan Times (HT).