Party spokesperson Kanwar Pal Singh, senior activist Manjinder Singh and Advocate Harpal Singh Cheema, chairman of Sikhs for Human Rights in a joint statement said higher ups in jail department were hell bent to create hurdles so that Prof Bhullar and other prisoners who have completed more than 18 years in prison could not be released on parole. “Terming the release of Bhullar as a threat to law and order is a figment of imagination of jail authorities”, said the leaders. 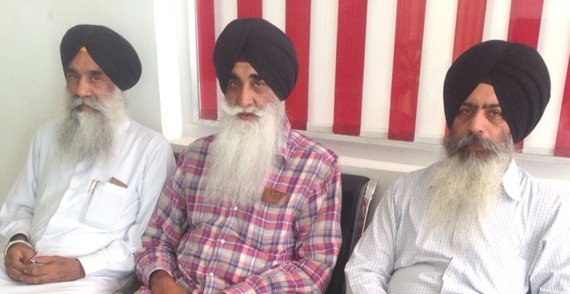 They said during the course of discussion between members of Sangarsh Committee and the political as well as police leadership it was agreed upon to grant parole to all such prisoners who have completed maximum prison term. However, the different and negative tone and tenor of jail authorities vis-à-vis parole to Bhullar has raised serious suspicion that all was not well within the government circles.

Strongly contesting the claims of jail department, they questioned how could a person who has completed 20 years behind bars and was not keeping good health since many years and was under medical treatment, could pose challenge to Punjab’s peace. Moreover, maintaining law and order in the state was the responsibility of police leadership and not the jail department.

They said the reported opinion of jail authorities had the blessings of the BJP, which has openly objected to Bhullar’s jail transfer from Delhi to Amritsar. “It’s the BJP who by proxy was speaking through the mouth of jail officials. Ironically, officers are going by the rhetoric of likes of Kamal Sharma, Laxmi Kanta Chawla, Maninderjit Singh Bitta”.

Taking a swipe at Badals for inviting top BJP leadership including its president Amit Shah for Anandpur Sahib celebrations, they alleged that from core of heart the BJP was anti-Sikh and anti-minority. They said inviting leaders of Hindutva party to participate in the 350th foundation day of birthplace of Khalsa given its controversial standpoint on every Sikh issue, tantamount to teasing the Sikhs.