BJP’s Politics Of Hatred Has Taken A Beating In Bihar: CounterCurrents

Indian Prime Minister Narendra Modi’s politics of hatred has taken a beating in the all important Bihar state assembly elections. Incumbent Chief Minister Nitish Kumar led grand coalition is all set to win two third majority in the election. Lalu Prasad led Rashtriya Janata Dal and Congress which are also part of the coaltions is set to form the next government in Bihar. Hindutva Ultra nationalist Bharatiya Janata Party (BJP) was humiliated because the BJP-led NDA’s main star for the campaign was Prime Minister Modi himself as the coalition went into the polls without a chief ministerial candidate. Modi addressed 26 election rallies in the state. BJP President Amit Shah camped in the state for the whole month overseeing every electoral preparation. Shah addressed 76 rallies in the state.

When general election was held in India in May 2014, BJP went to the election, fielding Narendra Modi as the Prime Ministerial candidate and ‘Development’ as the main election promise to the voters. While in Bihar election, the promise of development was relegated to the back seat and politics of divisiveness was the main election strategy. BJP president Amit Shah went so far as to say in an election rally that if BJP loses election in Bihar, crackers will be burst in Pakistan. 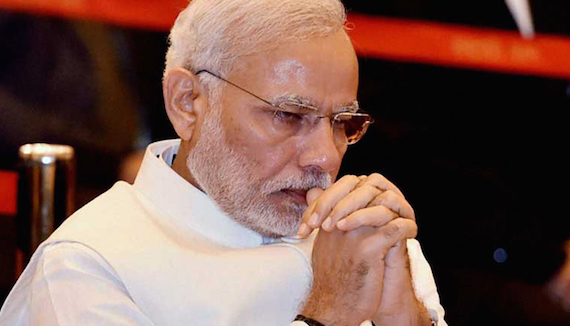 When a Muslim man in Dadri was lynched to death in Dadri, U.P over a rumour of keeping beef in his house, Prime Minister Narendra Modi kept an enigmatic silence. Why he kept his silence was revealed when in the last phase of election when Newspapers in Bihar carried BJP ads on its front pages attacking Chief Minister Nitish Kumar for his ‘silence’ on the issue of cow slaughter. The ads portray a picture of a woman hugging a cow along with a blazing headline in Hindi that translates into “Nitish Kumar ji, your allies kept insulting the holy cow of every Indian and you kept quiet!”. The advertisement goes on to say, “Stop doing vote bank politics and answer whether you agree with the statements of your colleagues.” It goes on to quote some of the statements of RJD leaders Lalu Prasad Yadav, Raghuvansh Prasad Singh and Karnataka Chief Minister Siddaramaiah on consumption of beef in the country. The ad is accompanied with BJP’s slogan, “If you don’t have an answer, you don’t get a vote.”

The campaign in Bihar shows how the 2014 national election campaign for ‘development’ eroded into ‘cow protection’ campaign. The issues of the ‘human’ electorate like price rise, poverty, malnutrition, jobs, development were devalued and the protection of cow became the single most important issue. The election results reveal that such divisive politics will not be tolerated by the Indian electorate. In simple terms what writers, scientists, academicians, film makers and intellectuals termed as ‘politics of intolerance’ was rejected in no uncertain terms by the people of Bihar.

Four Padma Bhushan Awards, 3rd highest civilian honour in the country, 40 Sahitya Academi Awards given to eminent literary personalities, 36 National film Awards were returned to Narendra Modi Government as a protest in just 18 months of BJP rule. The award returning movement is dubbed as ‘Award Wapsi’ echoing the Hindutva ultra-nationalists’ movement called ‘Ghar Wapsi’ (home coming) by which people of other faiths are forcefully converted back to Hinduism.

Recently three writers were killed by fascist forces. Dr. Narendra Dabholkar, Govind Pansare and M.M.Kalburgi were killed in cold blood and none of the culprits were arrested so far.

A hysteria has been unleashed by Hindutva forces over beef eating habit of vast majority of Indians. Three people were killed over this hysteria recenlty. Mohammad Aqlaq was lynched to death in Dadri in Uttar Pradesh, on the mere rumour of storing beef in his house, which later turned out to be mutton in forensic examination. Then Noman was beaten to death in the presence of police in Himachal Pradesh over the rumours that he was transporting cows. Lastly Zahid Rasool Bhat of Kashmir was killed in a petrol bomb attack over the rumour of cow slaughter.

Recently, Kerala house was raided by police in New Delhi over an allegation that the restuarant in the house was serving beef in blatant violation of the laws, including the federal rights of a state of the union of India. Although beef (especially cow meat) is banned in most of the states in India, beef is not banned in Kerala, West Bengal and several North Eastern states

On 2nd November, a leader of BJP threatened to behead Karnataka Chief Minister Siddaramaiah if he “dared to eat beef”. Shivamogga district level leader of the BJP SN Channabasappa also said that he would “play with his (severed) head”. Karnataka Chief Minister Siddaramaiah had said that he would eat beef if he wished, and that the BJP did not have the right to question him on it.

Popular Bollywood actor Shah Rukh Khan was asked to go to Pakistan and also alleged him to be a Pakistan agent by several senior leaders of BJP, when he said that there is “growing intolerance” in the country and nobody can question his patriotism.

BJP MP Yogi Adityanath compared him to Pakistani terrorist and 26/11 mastermind Hafiz Saeed, and said he is “welcome” to go to Pakistan. BJP leader Kailash Vijayvargiya said the actor lives in India but his “soul (aatma)” is in Pakistan .

With the defeat of BJP in Bihar, the nation can now heave a sigh of relief. It also puts more responsibility on the people of India to fight this politics of hatred with renewed vigour.

Note: Above write-up was originally published by The CounterCurrents (countercurrents.org) at source url: http://www.countercurrents.org/cc081115.htm. It’s reproduced as above for the information the readers of the Sikh Siyasat News. Users/ Reads may visit the source url to find the article on source website.