Blacklist issue is a trap being used by India to cause conflict: Sikh Federation UK

London: Following the Sikh Genocide in 1984, many Sikhs abroad protested and the Indian intelligence agencies determined hundreds of leading Sikhs that came on their radar were ‘anti-national’ and started what has popularly come to be known as the ‘blacklist’. Indian intelligence agencies handed over the blacklist to Indian embassies and High Commissions across the world.

The existence of the blacklist became known in the early 1990s, after some Sikhs abroad were denied entry into India. The blacklist is maintained by the Foreigners Division of the Ministry of Home Affairs, and for obvious reasons is not in the public domain. It is a secret list of names the Indian government maintains to try and manipulate overseas Sikhs who are barred from entering India. The Indian authorities have also pressured foreign governments to stop some of the same Sikhs travelling between the UK, Canada and USA to build the lobby for an independent Sikh homeland, Khalistan. 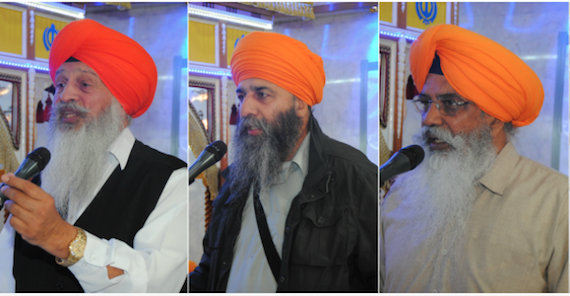 Some prominent individuals who were once deemed leading ‘anti-nationals’ in the UK have in recent years been making regular visits to India and are now all of a sudden singing the praises of Narendra Modi as some sort of saviour. The strong suggestion is they have been compromised, have been made to pledge their allegiance to India and completely stopped campaigning for Khalistan and/or agreed to maintain a façade of support for Khalistan possibly in return for supplying information and doing India’s dirty work by trying to cause conflict.

A joint statement by the senior leadership of the Sikh Federation (UK) said:

“The Khalistan movement has been boosted in recent months with India’s failure to extradite Paramjeet Singh Pamma and the lifting of the ban on the International Sikh Youth Federation (ISYF). The Indian authorities are now worried and desperate since these developments have followed Narendra Modi’s high profile visit to the UK last November and are deliberately using the blacklist issue to try and cause conflict and turmoil.”

“We will not allow India to use the blacklist issue as a trap to damage the Khalistan movement. Indian media reports suggesting names have been removed from a secret blacklist is a pointless tactic to try and discredit individuals. It is a gimmick and only becomes an issue if those individuals who are no longer on the secret blacklist, have passports and/or visas and travel to India without experiencing any difficulties. If they all of a sudden start to disagree with protests against India and ignore key issues this will be seen as a sign that they have abandoned the Khalistan struggle and will rightly be suspected of having pledged their allegiance to India.”

The senior leadership of the Sikh Federation (UK), its Chair, Vice Chair, General Secretary, Chief Organiser and Press Secretary have all not visited India since Operation Bluestar in June 1984, despite having lost family members who have passed away. Unlike others they have stuck to their principles and remained focused on the key demands. They alongside others such as Dal Khalsa UK leader Manmohan Singh have reiterated that they are fully committed to the goal of establishing an independent Sikh homeland, Khalistan and have no plans whatsoever to visit India. It is therefore irrelevant if they are or are not on any blacklist maintained by the Indian authorities.

Bhai Amrik Singh, the Chair and Bhai Narinderjit Singh, the General Secretary have been denied British nationality for the last 30 years, which is now expected to change with the lifting of the ban on the ISYF. Bhai Amrik Singh has not had a passport for the last 15 years and Bhai Narinderjit Singh also does not have a valid passport. Bhai Kuldip Singh, the Vice Chair is unable to travel to India having had several family members killed, including his father and cousin, and who came to the UK 25 years ago in 1990 where he has been granted political asylum. Bhai Hardish Singh, the Chief Organiser and Bhai Gurjeet Singh, the Press Secretary have British passports, but have never tried to obtain visas to travel to India since 1984.

With Narendra Modi visiting the UK in November 2015 a meeting of representatives of Gurdwaras and Sikh organisations in the UK was held on 3 October 2015 at Sri Guru Singh Sabha, Southall. A number of key issues were set out by the Federation of Sikh Organisations (FSO) that it was agreed should be conveyed by different means to the Indian regime – via direct written communications, briefing the UK Government and politicians, raising awareness by presenting issues to the mainstream media and through protests. The ‘protagonists’ that have subsequently been discovered to have been secretly discussing matters with Indian intelligence officers in London and Delhi accepted these were the key issues and raised no objections whatsoever at the time.

They were also specifically told in writing as well as orally on 3 October by the FSO that the issue of blacklists and having the right to freely travel to India should be viewed as personal matters and a minor issue. Blacklists and visas should not be raised as a Panthic issue as it was clear it was about individual rights that the Indian authorities would almost certainly try and use to manipulate and compromise individuals. However, all the protagonists no doubt prompted by their continued contacts with Indian intelligence officers have persisted with the blacklist issue, but remained totally silent on communication or progress on some of the key issues, such as:

· the legitimate demand for Sikh self determination, including the establishment of an independent Sikh homeland, Khalistan confirmed by the Sarbat Khalsa in April 1986;

· a UN-led inquiry into the 1984 Sikh Genocide and justice for the victims by punishing the perpetrators of these crimes against humanity; and

The Sikh Federation (UK) met with other Panthic organisation representatives and wrote to each of the protagonists on 15 December 2015 to point out they had compromised the agreed Panthic position, caused considerable division and controversy and had no mandate as they were not pursuing the main Panthic demands.

Many are of the view that the protagonists are being used by the Indian authorities to try and manipulate public opinion by emphasising dialogue can achieve results in certain areas. This is why they are concentrating on the personal matters of blacklists and obtaining visas to travel to India. They are then trying to link this to the emotive issue of the release of Sikh political prisoners, which is long overdue and simply the first step of addressing any political conflict.

The protagonists and Indian authorities however are increasingly recognising from the widespread opposition to Narendra Modi, the failed extradition of Paramjeet Singh Pamma and the lifting of the ISYF ban that the Sikh nationalists abroad are becoming an increasing political force that will simply not go away. There is a now a greater international interest and scrutiny on what the right wing Indian regime is doing with respect to minorities. The specific Panthic demands are on the table and sooner or later will all need to be addressed by the Centre and Punjab government. With elections planned for 2017 time is running out for those currently in power – both the BJP and the Akalis.