Blame Game Between AAP and Congress over Swearing-in Ceremony Arrangements 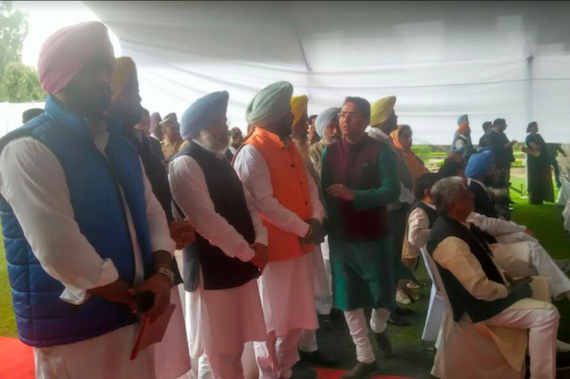 AAP MLAs standing during swearing in ceremony on Thursday

Mismanagement at swear-in-ceremony function shows the inefficiency of Congress to deal with the issues- H.S. Phoolka

Aam Aadmi Party on Thursday showed displeasure over the step-motherly treatment given to the AAP MLAs at the swear-in-ceremony of Congress government. The officially invited MLAs were not even provided chairs to sit during the ceremony.

Addressing the media at Chandigarh, AAP senior leader and MLA from Dakha, H.S. Phoolka and Chief Whip and MLA Bholath, Sukhpal Singh Khaira along with other MLAs said that the no arrangements were made to facilitate the elected representative related to Aam Aadmi Party. Phoolka said that this was the first time in the history, while chief minister was taking oath of his office and the leader of main opposition party along with his colleges was standing on the back of pandal.

Phoolka said that although the AAP MLAs don’t seek any VIP treatment of any kind but being the representative of people they must have given seats to sit at least. He said that AAP has culture of simplicity and all the MLAs follow the same ideology.

Khaira said that Congress has failed to come out of its feudal mindset and people of Punjab now will not accept the intrusive behavior of Captain Amrinder. “If congress cannot organize a function properly then what else the people of Punjab can expect from them” said Khaira.

“We wish that the Congress party fulfill its promises of giving jobs to at least one person from the family, waive of the loan of farmers, eradicate drugs from the state etc made to the people of Punjab. We will keep a tab on the activities of Congress government inside and outside the assembly and failing in performing its duty the government has to feel the heat of Aam Aadmi.” said Khaira.

The Punjab Pradesh Congress Committee (PPCC) has lashed out at the Aam Aadmi Party (AAP) leadership over their deliberate and mischievous attempt to undermine the office of the Governor with their blatantly false charges of mismanagement of Thursdaymorning’s swearing-in ceremony.

Reacting sharply to AAP Punjab leaders’ charges of inefficient handling of the event, which was organized by the Governor’s office, a PPCC spokesperson said a panic-stricken AAP, unable to swallow its ignominious defeat in the Punjab assembly polls, was trying desperately to defame the newly formed Congress government in the state by making false and baseless allegations. The spokesperson pointed out that the complete arrangements for the event were made by the Raj Bhavan, with the Congress government not even sworn in till the completion of the ceremony.

The AAP leadership, instead of accepting their electoral defeat gracefully and playing the role of a healthy opposition, seemed hell-bent on creating hurdles even before the Congress government was sworn in, as was evident from their behaviour at the swearing-in ceremony of Chief Minister Captain Amarinder Singh and his ministerial colleagues, said the spokesperson.

As is their habit, the AAP leaders are once indulging in theatrics and gimmickry to grab attention, without caring about the lack of Constitutional propriety in their behaviour, said the spokesperson, adding that there was no problem or chaos at all at the Punjab Raj Bhavan during the oath-taking ceremony. Had that been the case, the media, present in large numbers, would have been the first to put the spotlight on it, he added.

The entire drama, said the spokesperson in a statement issued here, was being enacted by AAP to mislead the public, as they had been doing all through the election campaign. The people of Punjab were not taken in by their false words and actions earlier, and would not be misled even now, he added.

Pointing out that this was not the first time AAP had tried to lower the dignity of a Constitutional authority, the spokesperson said the party’s national convenor Arvind Kejriwal had set a bad precedent by questioning the credibility of the Election Commission and going into a confrontationist mode against the poll body on several occasions in the run-up to the polls. Even after the results, Kejriwal had steadfastly refused to acknowledge that his party had been routed in the polls and continued to challenge the Constitutional authority of the Election Commission with his baseless charges of rigging of EVMs, he added.

The spokesperson urged the AAP leadership to behave with maturity, in keeping with their stature as the main opposition party in Punjab, and to play a constructive role in building the state’s development plank.