Maur/ Bathinda: A blast took place in Maur Mandi on late evening of Tuesday (Jan. 31) after Congress party candidate Harminder Jassi took out a road show in the town. As per media reports at least 3 persons died in this blast whereas 11 others were injured. A press release by the Congress party states that 4 people were killed in this blast. 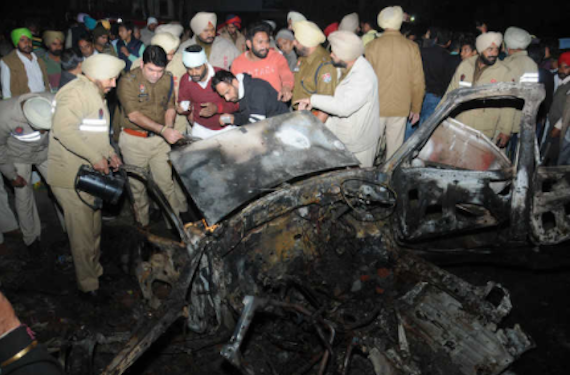 As per The Tribune report: [t]he vacant car, a Maruti Alto, bore a false registration number. It was thrown up into the air up to 15-20 ft and fell, injuring at least 11 persons. The explosion occurred barely 5-10 metres from where Jassi had addressed the rally outside the Congress party office in a Toyota Fortuner.

The political parties have taken the incident as an opportunity to accuse each other. In a press release issued late evening on Shiromani Akali Dal (Badal) blamed the Aam Aadmi Party (AAP) for the blast. SAD (Badal) chief Sukhbir Badal maintained that Maur blast direct result of alleged AAP-radical nexus. He said that ‘radical elements’ have infiltrated State in name of canvassing for AAP to foment trouble. On the other hand Congress party leader Capt. Amarinder Singh blamed both ruling Shiromani Akali Dal (Badal) and the Aam Aadmi Party for the incident.

Capt. Amarinder alleged that the situation was highly volatile, with the entry of AAP-sponsored outsiders escalating the tensions triggered by reports of criminal gangs being given a free hand by the Badal government to create mayhem during the polls.