Kaithal, Haryana (August 07, 2014): The Haryana Sikh Gurdwara Management Committee (HSGMC) today started Akhand Path Shaib Gurdwara Patshahi Chhevin in Guhla-Cheeka. The control of this Gurdwara Sahib was secured by HSGMC yesterday, as a gorup of about 150 persons led by Baba Baljeet Singh Daduwal and Avtar Singh Chakku had asked the SGPC employees to hand over the control. The SGPC employees had handed over the control of Gurdwara Sahib to HSGMC without any resistance or clash. 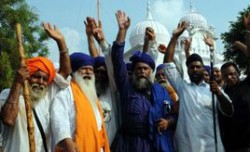 HSGMC supporters outside a Gurdwara Sahib in Haryana

According to recent information available with the Sikh Siyasat News (SSN) the HSGMC started Akhand Path Sahib at Gurdwara Sahib in Guhla-Cheeka.

HSGMC president Jagdish Singh Jhinda told Sikh Siyasat News (SSN) over phone that a formal meeting would be held in Guhla Gurdwara at 2:30pm to chalk out future strategy to take control of other gurdwaras in Haryana.

He also asked the Haryana government to register an FIR against the Shiromani Akali Dal (SAD) and SGPC members for occupying the Haryana gurdwaras illegally in the wake of the HSGMC Act.

He claimed that HSGMC has support “all the Sikhs” from Haryana.