Ludhiana: A seminar on “Languages of Sub-Continent and Process of Indian National Building” was organised by Samvad, an organisation to held interaction on socio-political issues, at Punjabi Bhawan, Ludhiana today. It was third such seminar held by Samvad at Punjabi Bhawan to explore the implications of the process of Indian Nation-building affecting different nationalities inhabiting the sub-continent.

The Key Note Address of the seminar was presented by Bhai Mandhir Singh, one of the organizers of the Samvad. 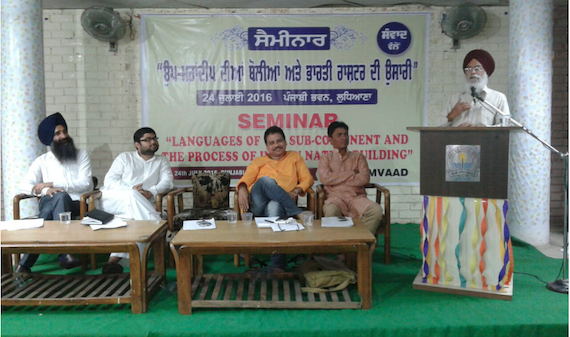 Speaking during the seminar Dr. Deepak Pawar, Faculty At The Department Of Civics And Politics, University Of Mumbai presented him paper on “Marathi Consciousness-Maharashtrian Identity And The Challenges Of The Coexistence Of Linguistic And Multilingual Nationalism”. He emphasised that the sub-continent was a multi-national region therefore the question of languages holds vital significance. 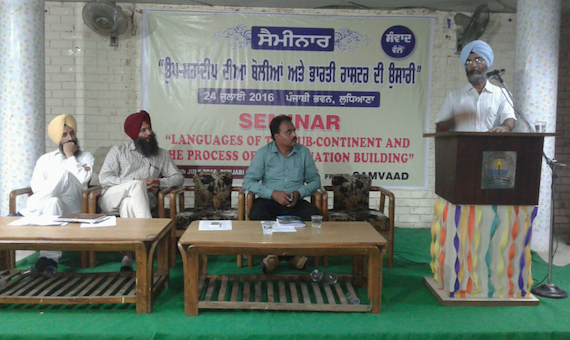 Dr. Joga Singh sharing his thoughts during the seminar

Garga Chatterjee, expert from West Bengal said, “the forcible imposition a language to the natives of some other language was the process of making them slaves. All other languages communities have been suffering due to impositions of Hindi and English. 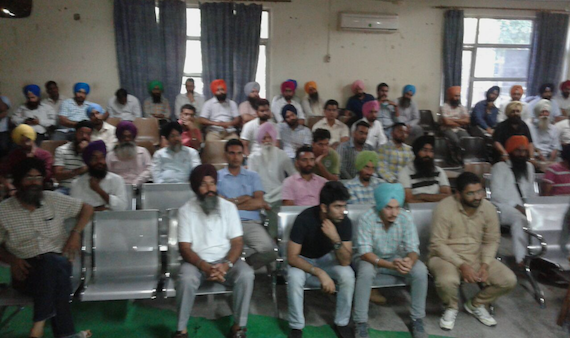 He discussed that how the linguistic question in Bengal has been shaped in the last 100 years and how it has been, in part, strongly linked to the nationality question. He also discussed the details of linguistic discrimination issues in present day West Bengal and focussed largely on matters on education, legal process, administrative work, public services, banks and other issues. He also charted out future strategies to reverse this discrimination. 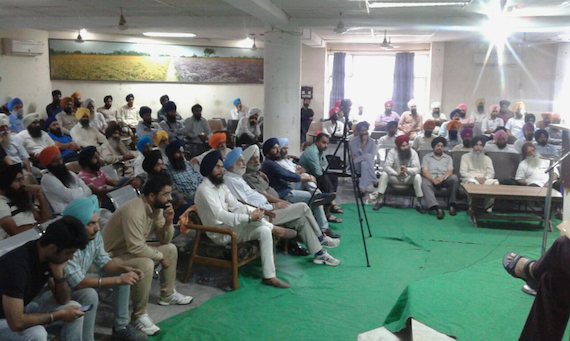 Another view of gathering

Mr. Saket Sahu from Orisa presented his paper on “Kosali Language And Its Relations With State & Central Politics”. He stressed that the Government of India has been denying the legitimate right of natives of Kosali language to get their language included in the 8th Schedule of Indian constitution. He said that the Kosali language was an independent language but it was wrongfully categorised as a dialect of Oriya. 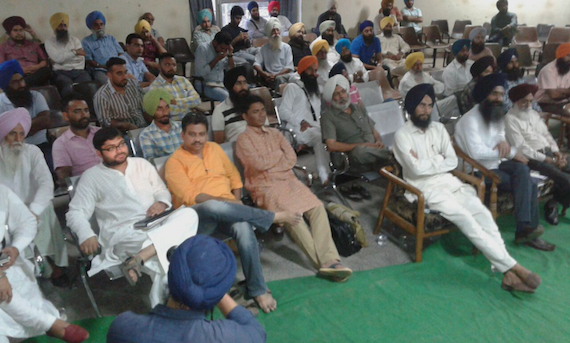 The editor of a Kosali language magazine said that many independent languages in Indian sub-continent were being categorised as ‘dialects’ of other dominant languages, which prevents their development.

Speaking on the occasion, Senthil Nathan, Federal Co-ordinatior of Campaign for Language Equality and Rights (CLEAR) said, India is essentially a federation of various nationalities and regions, almost a sub-continent in its economic characteristics. As the modern economics have prioritized human capital as the key element in the development, it is high time that India’s policy makers to awake on the linguistic element of the human capital. Europe and South East Asia have immensely benefited when they invested on language policy, language planning and language resources based on mother tongue education and native language infrastructure. However, India is one of the very few and last countries in the world which missed the bus and struggling to find educated and trained human capital in most of the areas of modern economic activities. It’s over reliance on English has killed Indian languages as its empire-like attitude has alienated non-Hindi speaking communities. India has no option but to respect its linguistic diversity, accord legal and economic status for the Indian languages and invest on language resource development and mother tongue education if it is really interested in guaranteeing the unity and diversity in the country and real and inclusive growth for all of its citizens.

Dr. Sikander Singh presented his paper on “Emergence Of Hindi And Its Impact On Other Languages Of The Sub-Continent”.

Dr. Surjeet Pattar and Dr Joga Singh Virk from Punjabi University highlighted the importance of mother tongue in the life of human being. He emphasized to change the medium of education from other languages to mother language.

Thanks giving note was presented by Advocate Jaspal Singh Manjhpur.

The proceeds of the stage were conducted by Parmjeet Singh in first session and Makhan Singh in second session of the seminar.