The British Deputy High Commissioner in Chandigarh, Andrew Ayre is under severe pressure following a controversial and offensive interview full of half-truths in The Times of India titled: ‘There’s no legal base for a separate state’ Andrew Ayre.

He also stands accused of becoming a mouth-piece for the Indian state by trying to compromise Sikh organisations by telling untruths and lacking respect for confidentiality when meeting Sikh representatives.

An even more serious charge is he discussed without permission the case of Jagtar Singh Johal, the 31-year-old Scot from Dumbarton who has been tortured by police in an Indian jail and has been held without a proper trial for almost a year. 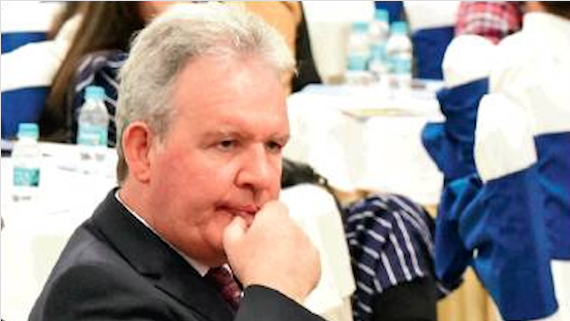 The competence of this junior diplomat and if he can be trusted has been called into question with this interview. His unprofessionalism, abandonment of diplomatic protocol and limited understanding of the historic, moral and legal basis for an independent Sikh State suggests he is not suitable to represent Britain in the Sikh homeland, Punjab.

As all those who attended the London meeting have and can confirm there was no discussion whatsoever about a separate Sikh State, Referendum 2020 or the police raids on the homes of five Sikh activists as these issues were not on the agenda given the range of Sikh organisations invited.

Instead there was a lengthy discussion on the human rights situation in Punjab and across India. Andrew Ayre when pushed admitted in the meeting that the human rights situation was dire and not improving for women and minorities with the blame firmly and squarely at the feet of the right-wing BJP government. He should have shown courage and gone public with such criticisms of the Indian authorities in his interview with the Times of India.

The Sikh Federation (UK) in the meeting also exposed the total and consistent failure of the Foreign and Commonwealth Office to officially acknowledge the poor human rights situation in India in its annual human rights report.

However, when Andrew Ayre met Jagtar Singh Johal’s family and his MP Martin Docherty-Hughes three days later on 28 September Andrew Ayre was rebuked by his family for breaching his confidence. Jagtar Singh Johal is on record as stating he only authorised the Deputy High Commissioner to discuss his case with his family, his MP and the Sikh Federation (UK) so he is bang out of order.

When Andrew Ayre met Jagtar Singh Johal’s family he was told he was living in an ivory tower in Chandigarh and was ignorant to the long-term suffering and experiences of ordinary Sikhs in Punjab and elsewhere. The protest in Bargarhi, the associated targeted killing of innocent Sikhs and desecrations were highlighted to show significant problems remain.

Andrew Ayre also showed his naivety and bias in the meeting with Sikh representatives when without prompting he openly criticised the previous Punjab government led by the Shiromani Akali Dal/BJP alliance compared to the current Congress incumbents.

Although Referendum 2020 was not discussed had Andrew Ayre raised this we would have reminded him that what is planned is a non-binding referendum that does not require the authority of the Indian state. For him to say in his interview there is no legal basis for Khalistan demonstrates his total lack of knowledge of history and international law.

The Sikhs’ right to self-determination and claim to re-establish a sovereign Sikh State is based on the fact Sikhs first secured political power in the form of an independent state in 1710 CE. The larger sovereign Sikh state established in 1799 CE was recognised by all the world powers as a subject of international law and was party to several treaties with the British.

We would also have pointed out the ‘territorial integrity’ limitation does not apply to India when it comes to Sikhs securing independence by means of secession as India has systematically oppressed Sikhs who have not had their political and human rights respected since 1947. The level of oppression of the Sikhs in Punjab and elsewhere in India, especially during the period 1978 to 1995 was severe.

The violation of “individual” human rights such as genocide and other crimes against humanity, such as extra-judicial killings, disappearances, torture, rape and illegal detention have left the Sikh people traumatised. Independent human rights observers at the United Nations familiar with the Sikh situation accept that the ‘territorial integrity’ limitation cannot be afforded to India.

“The interview by Andrew Ayre in The Times of India is an absolute disgrace. He has become a mouthpiece for the Indian state and as far as British Sikhs are concerned he cannot be trusted to represent our interests.”

“He has not had the decency to apologise to the family of Jagtar Singh Johal for a serious breach of confidentiality and shown with his latest outburst he has no sense of compassion or understanding for the plight of Sikhs in Punjab.”

“Foreign Office Ministers have emphasised the need to avoid ‘megaphone diplomacy’ when it comes to India. However, this interview shows it remains a priority for British diplomats that have double standards to keep India happy at the expense of the Sikh minority in the UK and Punjab.”