London (2 November 2017): Just before Boris Johnson entered the Grimond Room to give evidence to the Foreign Affairs Select Committee yesterday he was ‘served’ with a copy of the Sacrificing Sikhs report produced by the Sikh Federation (UK) that was officially released half an hour later.

When he was giving evidence he was left floundering when he was specifically asked about the report by Ian Austin, the Labour MP for Dudley North.

Later he admitted he had not had the opportunity to look at the evidence presented in the Sacrificing Sikhs report that shows UK assistance was not a ‘one-off’ and was not ‘limited’.

The report also contradicts the findings and conclusions reached by Sir Jeremy Heywood in the in-house review commissioned by David Cameron. 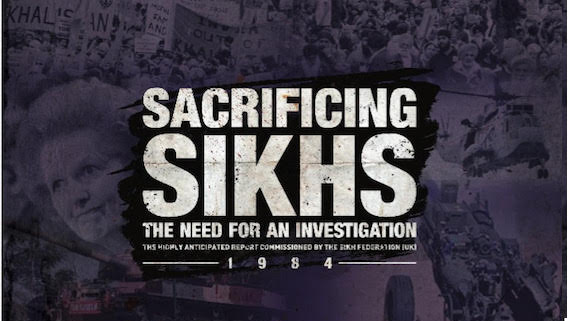 The Sacrificing Sikhs report provides evidence from the government’s own files to show the in-house review was far from ‘rigorous and thorough’ the words use by William Hague when he addressed Parliament in February 2014.

The report released by the Sikh Federation (UK) proves the Heywood was inadequate and it questions its very integrity. It also means Parliament was misled.

Ian Austin urged the Foreign Secretary yesterday to urgently meet with the Sikh Federation (UK) to consider the evidence presented.

KRW Law representing the Sikh Federation (UK) are writing to the Prime Minister, Home Secretary and Foreign Secretary today following the release of the report.

They will be pressing them to urgently consider commissioning an independent investigation according to the Inquiries Act 2005 in light of the evidence presented in the report and the wider public interest of truth and justice.

The letter states: “Should you wish to contest any of the findings of the report we would ask that you set out in writing your reasons for contesting.”