London: The Communities Secretary has confirmed support for Sikh war memorial to mark the contribution made by Sikh servicemen, said Sikh Federation UK in a statement issued yesterday.

Plans for a memorial to honour the “contribution Sikhs made to Britain and her allies” has received backing from Communities Secretary Sajid Javid on Tuesday (January 30).

He confirmed government support for campaign to erect a Sikh war memorial in London. Communities Secretary Sajid Javid said: “The part played by Sikh servicemen really stands out – a contribution that’s all the more remarkable when you consider that these brave men travelled thousands of miles to fight for a country that wasn’t their own.” 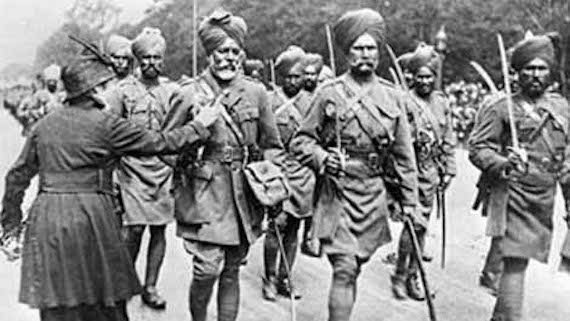 “We are indebted to all those servicemen who volunteered to serve and fought to defend the freedoms we enjoy today”, said he.

“That’s why a Sikh war memorial in our nation’s capital will honour their sacrifice and ensure that this part of our shared history is never forgotten. So I’m delighted to get behind this campaign and ensure its success”, Sajid Javid added.

“Sikh servicemen in the British Armed Forces have displayed extraordinary acts of bravery and sacrifice in the service of Great Britain and her allies. Hundreds of thousands of Sikh soldiers saw active service during the First and Second World Wars and in subsequent conflicts. More than 83,000 turbaned Sikh soldiers gave their lives and more than 100,000 were injured during both Wars”, the Sikh Federation UK said in a statement.

“Despite making up only two per cent of the Indian population when the First World War broke out, Sikhs accounted for more than 20 per cent of the Indian Army’s manpower. Sikh soldiers from the Punjab and surrounding states saw action in Europe, Africa and the Middle East, most notably on the Western Front and at Gallipoli”, the Sikh body noted.

It further said that [o]n the Western Front Sikhs fought and died alongside their British, Indian and Commonwealth counterparts. Their contribution was essential to the war effort and of the twenty-two Military Crosses awarded to Indian soldiers, fourteen went to Sikhs.

“As part of marking the final year of the First World War centenary commemorations, Government has extended support for a campaign led by Slough MP Tanmanjeet Singh Dhesi to help set up a Working Group and support the campaign to find a suitable location. Once an appropriate site has been identified and a memorial agreed on, the Government has agreed to provide funding towards the project”, Sikh Federation UK noted.

Bhai Amrik Singh, the Chair of the Sikh Federation (UK) said: “This is a massive step forward to deliver one of the ten items in the Sikh Manifesto – A monument in central London to highlight Sikh Sacrifices in the World Wars.”

“Tanmanjeet Singh Dhesi and the All Party Parliamentary Group for British Sikhs should be congratulated on not only securing cross-party support, but pledges of £375,000 from the Sikh community at the launch this evening”, said Bhai Amrik Singh.

“The monument when built will be a tribute to the sacrifices over 100 years ago by Sikh soldiers in World War One who were affectionately known as the Lions of the Great War”, he added.

“The monument when built will attract visitors from across the globe and be a huge public statement in the heart of London regarding the distinct Sikh identity and contribution of the Sikh Nation”, said he.