London: A proposed legislation in Britain had concerned Sikhs living there as it was affecting the possession of Kirpans. The legislation called Offensive Weapons Bill became a law yesterday. 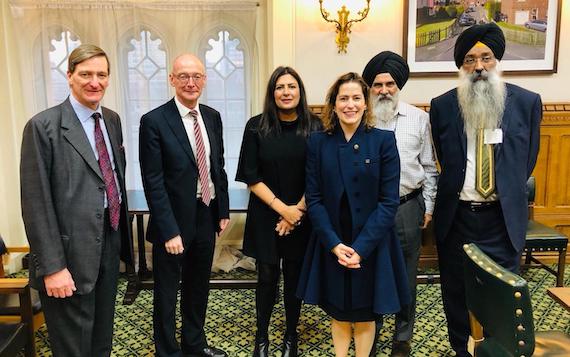 The Sikh Federation UK has shared detailed update on this issue, which is being shared in verbatim below, for the information of readers of the Sikh Siyasat News (SSN).

The Offensive Weapons Bill yesterday completed its progression through Parliament and received Royal Assent to become law. It was aimed at young people and to tackle the menace of increased knife crime and acid attacks.

The Bill however included clauses directly impacting on Sikhs, including extending existing offences of possessing a bladed article or offensive weapon on school premises to cover further education premises and banning the sale and possession of curved swords defined as those over 50 cm both in public and private.

Despite the huge impact on Sikhs these proposed changes were being introduced without any consultation with the Sikh community. The most disturbing proposed change was to criminalise the 3ft Sikh Kirpan and the effect this would have on Sikh religious practices. The change was justified by overzealous Home Office officials as proportionate in the Policy Equality Statement that was published alongside the Bill.

The Home Office and the Ministry of Housing, Communities and Local Government (MHCLG) that holds Sikh Roundtable meetings were negligent not to communicate or consult with the Sikh community. This is inexcusable as government officials failed to identify significant unintended consequences of banning the possession of large Sikh Kirpans that are kept by virtually all Sikh families in their homes.

Their logic that the impact was mitigated by the narrower “religious ceremonies” defence introduced in legislation for curved blades over 50 cm in 2008 covering the use of the large Sikh Kirpan in religious ceremonies i.e. Anand Karaj or Sikh wedding ceremonies showed officials lacked a basic understanding of the Sikh way of life and religious practices or had consulted those who also have little or no understanding.

The advisers to the Sikh Federation (UK) were alerted by a Sikh police officer from Leicester on the potential impact on the Sikh community just prior to the Third Reading of the Bill in the House of Commons. Simply possessing the large Kirpan would have meant all Sikh families being criminalised and those found in possession facing a prison sentence of up to one year.

Within 48 hours a group of cross-party MPs led by Preet Kaur Gill MP, Dominic Grieve MP and Pat McFadden MP belonging to the All-Party Parliamentary Group (APPG) on UK Sikhs tabled an amendment to change the wording in the Bill to the much wider term “religious reasons”.

MPs met with Home Office Minister Victoria Atkins to get the government to put down an amendment in the House of Commons. Preet Kaur Gill MP also met Home Secretary, Sajid Javid. The MPs convinced them of the need for a wider government amendment to cover the sale, possession and use of the large Sikh Kirpan for “religious reasons”.

Officials were instructed by Ministers to move to use the broader term “religious reasons” as large Kirpans are kept in Sikh homes for a range of religious reasons, such as to place before the Guru Granth Sahib Ji, the Sikh holy scriptures.

MPs and Sikh representatives from the Sikh Federation (UK) and Sikh Council UK with the backing of Home Office Ministers then met officials on 31 October 2018 to thrash out the need for a government amendment and the officials went away to consult counsel.

The Sikh Federation (UK) arranged for constituents to write and lobby over 250 MPs before the Third Reading and organised a lobby in Parliament for 14 November 2018.

The government amendment was approved at the Third Reading in the Commons on 28 November 2018 and the word Kirpan meaning ‘mercy (kirpa) & honour (aan)’ was included in the Explanatory Note for the first time.
Sections 139 and 139A of the Criminal Justice Act 1988 provide for offences of having an offensive weapon in a public place or school premises respectively without lawful authority or good reason.

However, it is a defence for a person charged with an offence to prove that he or she had good reason or lawful authority for having the article in a public place or school premises. It is a defence to show that you had the knife or bladed or pointed article for use at work, for religious reasons (e.g. the Sikh kirpan) or as part of a national costume (e.g. the sgian dubh of traditional Highland dress).

Amritdhari Sikhs are required to always wear the Kirpan and have been able to rely on the religious reasons defence in most public places, employment and schools. However, challenges have existed in private establishments e.g. London Eye and complications sometime arise in schools or employment that can often be overcome.

The changes in legislation that came into effect yesterday now mean the broader “religious reasons” phrase specifically applies to the Sikh Kirpan. What has gone unnoticed is that “religious reasons” now for the first time have been defined in law as a “good reason” for possession and affords additional protection for the smaller Kirpan.

“We would like to thank Ministers and MPs from all political parties that backed the Sikh community and recognised our religious rights relating to the 3ft Kirpan.”

“Officials created this mess, but common sense has prevailed and what has emerged is the need for proper community consultation, greater understanding of the Kirpan and an outcome that is far more than status quo.”