In a statement issued after the meeting Tanmanjeet Singh Dhesi said that their discussion “centred around the need to recommence direct flights between London Heathrow and Amritsar Airport. As a former Mayor of Amritsar, he was passionate that the city’s economy and well being should be advanced, and had already done a great deal to improve airport infrastructure.” 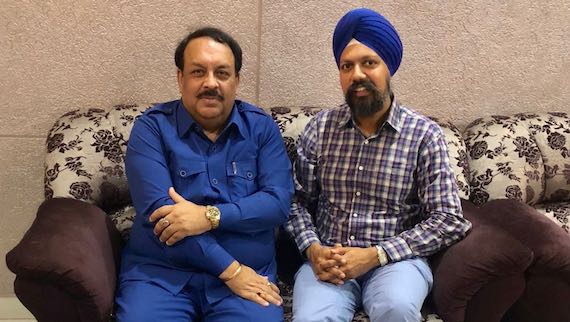 “I will champion the cause to initiate direct flights between my own city of Amritsar and the major global hub of London without delay. I will personally take this matter up with Indian Civil Aviation Minister Jayant Sinha”, Shwait Mailk said.

MP Dhesi remarked that “We both agreed that the best option is to use the existing Air India slots at Heathrow Airport (for the twice daily Heathrow-Delhi flights) and make one of them Heathrow-Amritsar-Delhi”.

Given that Air India is a government owned carrier, the decision will be taken by the government in New Delhi.

MP Tanmanjeet Singh Dhesi, who seemed very pleased with their interaction, stated that “With Mr Malik’s high level involvement, I’m confident that this direct flight campaign will finally achieve its goal, thereby benefitting travellers from my own Slough constituency, the UK, others connecting from North America, Europe and of course Punjabis themselves”.