Twenty MPs spoke on April 30 during a 90-minute debate in British Parliament on the Contribution of Sikhs in the England to mark the end of the first ever Sikh Heritage Month.

Emma Reynolds the Labour MP for Wolverhampton North East referred to the Sikh Manifesto produced by the Sikh Network when she said: “At election time, we always know what the Sikh priorities” and “demands are” “for the election”. She congratulated Sikh organisations who produce the manifesto for the election.

Many MPs spoke about the importance of Sikh representation and praised the two Sikh MPs. Jake Berry MP, the Minister from the Ministry on Housing, Communities and Local Government said he was “delighted that our Parliament has been made richer and more diverse.”

Talking about Tanmanjeet Singh Dhesi MP he referred to history being made with the first turban-wearing Sikh in Parliament. Speaking about the first Sikh female Preet Kaur Gill MP he said she was: “doing a fantastic job representing not just her constituents but the Sikh community more widely.” 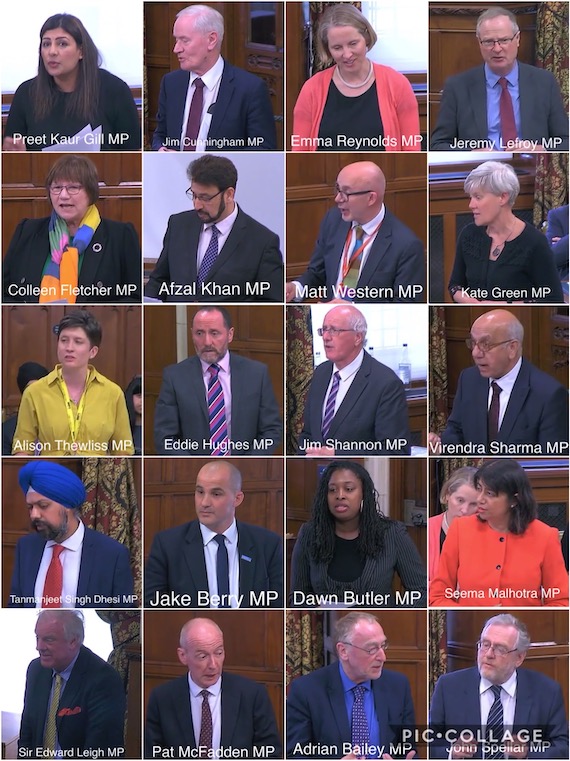 However, the Government Minister came under pressure from many MPs, like John Spellar Jim Cunningham and Tanamanjeet Singh Dhesi, on the need to act much more quickly on the Sikh war memorial in central London. In January 2018 the Communities Secretary, Rt. Hon. Sajid Javid confirmed support for a Sikh war memorial in central London to mark the contribution made by Sikh servicemen.

He stated: “Once an appropriate site has been identified and a memorial agreed on, the Government has agreed to provide funding towards the project.”

The site, near Admiralty Arch has been known about for many months and the design of the memorial is nearing finalisation. Preet Kaur Gill MP and Pat McFadden MP referred to the Lions of the Great War monument outside Guru Nanak Gurdwara in Smethwick and the support provided by Sandwell Council.

Many MPs also used the opportunity of this debate to raise the matter of their disappointment that an apology for the Jallianwala Bagh massacre 100 years ago on Vaisakhi in Amritsar had not yet been forthcoming. Seema Malhotra MP who obtained the debate specifically spoke about the story of Shaheed Udham Singh who she said, “made it his life’s mission to assassinate the lieutenant governor of the Punjab”.

Several MPs spoke about hate crimes targeting Sikhs. Preet Kaur Gill MP spoke about the disappointment with the hate crime action plan refresh given the promises made to Sikh organisations that “they would not be ignored or be invisible to Government”. She urged the government to work with the APPG on UK Sikhs to address the under-reporting of Sikh hate. She urged the Government to reach out to Manchandan Kaur, the new chair of the community safety group for the Sikh Council UK.

There were several references to Sikh articles of faith – the turban and Kirpan in particular. Pat McFadden MP spoke of the bravery of Tarsem Singh Sandhu, who led the fight in Wolverhampton for Sikhs to be able to wear a turban while driving a bus. He said: “He had to face down great hostility to win his battle, and his bravery and that of those who campaigned alongside him paved the way for change that today we take for granted. Even after that great progress, however, there are still struggles. Legislation still has to be amended to ensure that the simple act of observing the five Ks and wearing a turban can be done freely.”

Preet Kaur Gill MP struck a chord when she said: “I want us to do more than offer warm words about the contribution of Sikhs”. She spoke of the “repression and exploitation that has occurred in Britain’s name” “and we must know the truth of the role of the then Government involvement in Operation Blue Star, otherwise known as the 1984 Genocide of Sikhs.

Alison Thewliss the SNP MP from Glasgow Central raised the campaign for Jagtar Singh Johal and the meeting with the Foreign Secretary last week. Eddie Hughes the Conservative MP from Walsall North said he “met with Jagtar’s wife and brother last week after they had met with the Foreign Secretary, so there is cross-party, consensual agreement that we support the “Free Jaggi Now” campaign.”

Several MPs also touched up touched upon freedom of religion Jim Shannon a DUP MP for Strangford criticised Article 25 of the Indian constitution and spoke of the “Khalistan political movement” while criticising right wing Hindu nationalism.

The Sikh Federation (UK) provided briefing to more than half the MPs who spoke during the debate on a wide range of issues.

Bhai Amrik Singh, the Chair of the Sikh Federation (UK) said: “We have come along way with lobbying. We now have two Sikh MPs who not only take up issues themselves without prompting but are also able to influence other MPs from across the political spectrum to speak up for the Sikh community and take up the full range of issues that concern us.”