Jammu: As per the media reports, India’s Border Security Force (BSF) on Saturday predicted that it it may have a “limited confrontation” with Pakistan on the International Border (IB) in Jammu and Kashmir in April, soon after the harvest season is over. 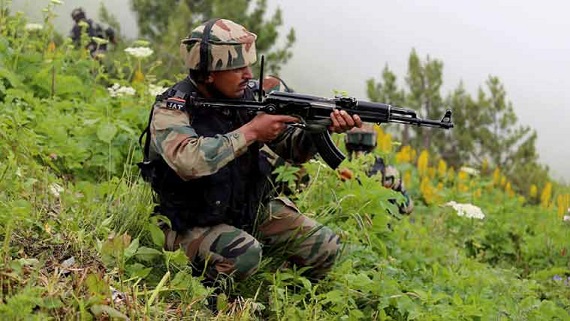 The BSF also claimed that multiple infiltration bids by Pakistan along the International Border (IB) have been foiled in recent past.

It was claimed in the Indian Parliament that Pakistan violated the ceasefire agreement along the LoC and the International Border in Jammu and Kashmir 633 times in the first two months of this year in which 10 security personnel and 12 civilians were killed.

Over 432 incidents of ceasefire violation have taken place along the Line of Control in Jammu and Kashmir and 201 such incidents along the International Border this year till February, Union minister of state for home Hansraj Gangaram Ahir alleged in the Parliament.

“As I said, we anticipate that immediately after the crops are cut (harvesting) we may have a limited confrontation with Pakistan,” BSF Director-General K K Sharma claimed while interacting with the media.

Furthermore, he said every year there has been limited engagement with Pakistan in April after crops are harvested.

“We wish that this should not happen (confrontation), but we have to be prepared,” he further maintains in his statement. K K Sharma further stated that the Jammu frontier and the western command are “well prepared”.