Amritsar, Punjab: A bullet reportedly pierced through the Dastar and jacket of an employee (Sewadar) of Shiromani Gurdwara Parbandhak Committee (SGPC) standing in the Parikarma of the Darbar Sahib on Thursday.

The bullet only scratched chest of Gurpreet Singh who was on duty near the Dukh Bhanjani Beri. 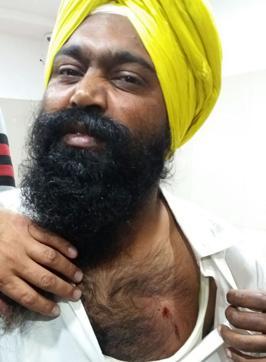 Gurpreet Singh, who was reportedly hit by a bullet while on duty inside Darbar Sahib complex

“Panic broke out among the pilgrims and the others present when they spotted the bullet on the Parikarma floor. Whether it was a stray bullet or fired at a specific target remains a subject of speculation”, notes a news report by Hindustan Times (HT).

Soon after the incident Gurpreet Singh was taken to hospital.

Sources told SSN that security-cameras installed in the Parikrama had caught Gurpreet Singh’s Dastar moving a bit when the shot had come through it.

Police and top officials of the SGPC inspected the scene of crime.

“We have registered a case and started with investigation,” said Amritsar police commissioner Jatinder Aulakh, adding: “I am very much sure that the bullet, which seems to be of a .315 rifle, was not fired from within the shrine. It came from outside, definitely; and lucky that the shot wasn’t fatal.”