Union City, California, USA: In November 1984 Sikhs were subjected to genocidal massacres throughout India in November of 1984. The Sikh diaspora in the North America has been consistently vouching and lobbying the authorities at Federal, State and local level to get those horrifying events recognised as “Genocide”. These efforts have finally started yielding results as many city councils of the State of California have passed resolution recognizing the events of November 1984 as ‘Genocide’. 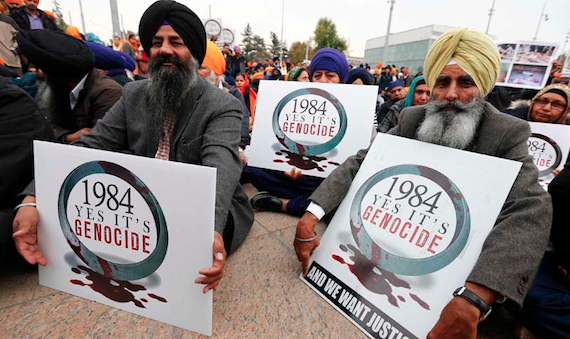 A post on Facebook page of Union City reads: “[T]onight at City Council, we formally recognized the November 1984 Anti-Sikh Violence in India as genocide. Thousands of Sikhs lost their lives and thousands more were displaced after what was believed to be a well organized massacre. For three days, extreme acts of violence against Sikh men and women ensued and Sikh-owned homes, businesses and Gurdwaras were burned down. The Indian Government and the international community have not properly recognized this dark event in our history as a crime against humanity. Thanks to our Sikh community for attending and showing support“.

Sikh Siyasat News  (SSN) has assessed a copy of the resolution passed by the Lathrop City on 21st of November 2016 which read as follows:

WHEREAS,Sikhism is the world’s 5th largest religion with more than 26 million followers; and

WHEREAS, in the aftermath of Indira Gandhi’s assassination on October 31, the then ruling party of India, Indian National Congress organized and carried out, through its workers, supporters and sympathizers, violence against the Sikh population throughout the country; and

WHEREAS, that the violence against the Sikhs continued unabated for several days in more than 100 cities across India resulting in thousands of Sikhs killed; thousands of women raped; hundreds of Gurudwaras (Sikh Temples) burnt and more than 300,000 Sikhs displaced; and

WHEREAS, in 2011, a mass Grave of Sikhs in village Hondh-Chillar, state of Haryana was unearthed and several similar graves, ruined villages, burnt Gurudwaras and other traces of Sikh population annihilated during November 1984 in the states of Haryana, West Bengal, Uttar Pradesh and Jammu & Kashmir; and

WHEREAS, United States laws and U.N Genocide Convention defines “attack with an intent to destroy in whole or in part, a religious or ethnic community” to be Genocide; and

WHEREAS, 18 U.S.0 Section § 1091 and “Genocide Accountability Act of 2007” make the crime of Genocide committed anywhere and anytime, punishable by the United States Courts.

NOW THEREFORE, BE IT RESOLVED the Mayor and City Council of the City of Lathrop recognize the November 1984 violence against Sikh lives, properties and places of worship throughout India was carried out with intent to destroy the Sikh community and was thus “Genocide” as defined under the laws of the United States and the 1948 UN Genocide Convention; and condemn continuing gross human rights violations committed against religious minorities in India; and

NOW THEREFORE, BE IT FURTHER RESOLVED the Mayor and City Council of the City of Lathrop formally request the United States of America and the Republic of India prosecute those who committed acts of Genocide in November 1984 against Sikh lives, properties and places of worship.

As reported by the Sikh 24 similar resolution was passed by the City of Selma Pass.

Raj Singh who was involved in the passing of the resolution stated that “Once we have support from cities across the country, we can push to seek recognition at a state and country wide level”.

MUST WATCH VIDEO to know as to how the events of November 1984 were actually a Genocide: