Ottawa, Canada: After Canada’s Liberal Party rode to victory, newly-minted Prime Minister Justin Trudeau welcomed Sikh veteran Harjit Singh Sajjan as Defence Minister, making him the only Sikh in the world to hold such a position.

“We congratulate Harjit Singh Sajjan for this historic achievement,” comments Bhajan Singh of Sikh Information Centre (SIC). “As his selection came days after Sikhs worldwide commemorated the 31st anniversary of the Indian State’s genocide against our people, we are reminded of how important it is for a nation’s security forces to understand how to operate in a defensive rather than offensive capacity. So we hope Minister Sajjan’s appointment coincides with a non-interventionist foreign policy and gladly welcome his cooperation with Prime Minister Trudeau’s commitment to winding down Canadian involvement in foreign wars in the Middle-East.” 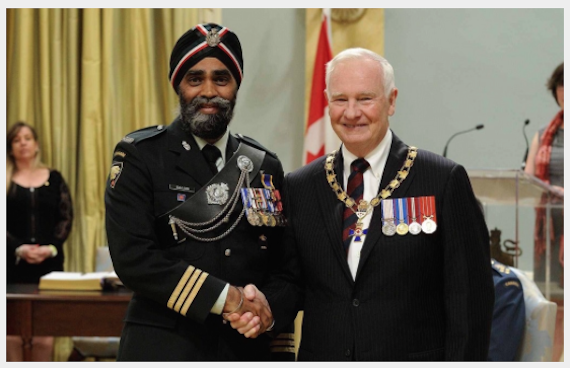 Sajjan, a decorated Lieutenant-colonel in the Canadian Armed Forces, has served abroad four times — once in Bosnia and thrice in Afghanistan — and previously made history in 2011 as the first Sikh to command a Canadian Army regiment. Elected to parliament as a representative for Vancouver South, he previously worked for 11 years as a Vancouver Police Department detective. His Nov. 4 appointment as Minister of National Defence comes after the Liberal Party, upon coming to power, pledged to end Canada’s bombing campaigns in Iraq and Syria; last year, their predecessors ended the country’s participation in the Afghanistan War. 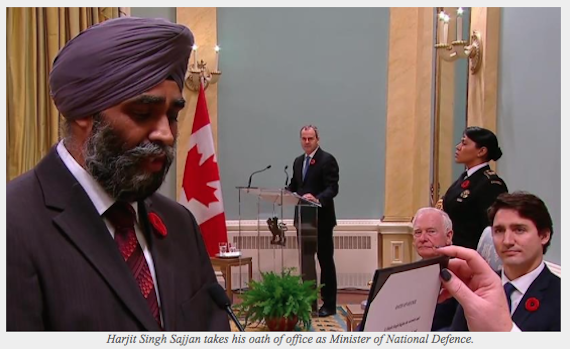 “He should concentrate on policy,” remarked retired Brigadier-general Dave Fraser, who tasked Sajjan in 2006 to serve as an intelligence liaison to Afghani politicians. Speaking on behalf of the Conference of Defence Associations Institute, an NGO that promotes informed public debate and discourse on national security and defence issues, retired Colonel George Petrolekas suggested Sajjan should have a “serious conversation” with United States officials about whether or not Canadian troops should play a role in training militants in Middle-Eastern hotspots.

“With his record of diplomacy, negotiation, and intelligence-gathering, Minister Sajjan seems well-suited to guiding Canada’s foreign policy away from expensive and perpetual military intervention,” says SIC Executive Director Pieter Friedrich. “Before him stands the opportunity to play a momentous part in the future of a thriving Canada by steering the country towards a foreign policy of freedom that embraces peace, commerce, and honest friendship as its most effective tools. We saw just last month the tragedy that can result from military intervention abroad when 30 civilians died after the U.S. bombed a Doctors Without Borders hospital in Kunduz, Afghanistan, and in light of that, we hope that Sajjan will draw on the history of his Sikh people to see the higher road.”

Sajjan joins a total of four Sikhs appointed to cabinet positions, including Navdeep Singh Bains (Minister of Innovation, Science, and Economic Development), Amarjeet Singh Sohi (Minister of Infrastructure and Communities), and Bardish Chagger (Minister of Small Business and Tourism). Chagger is the first Sikh woman ever appointed to the Canadian cabinet. Sohi, meanwhile, personally tasted state-sponsored violence against Sikhs. Born in India, he began organizing peaceful protests there in the 1980s to agitate for rural land reform. Arrested for his efforts, the Edmonton Journal reports: “He spent two years in prison, without charge, the victim of torture, malnutrition and solitary confinement, before he was eventually exonerated by a CSIS investigation and an Indian court.”