Ottawa, Ontario (by Manjit Singh from Canada): OCT 1: Leadership hopeful, Sardar Jagmeet Singh wins the seemingly impossible race hands down, with 53.8% votes in the first round, thus creating a historic moment in the history of the NDP (New Democratic Party) of Canada. In his victory speech his humble personality gave credit not to himself but all the volunteers who teamed up for this campaign to muster the winning support.

He said ““I don’t have the words to capture this journey and how this feels right now. It’s an incredibly profound honour.”

Next he thanked the current outgoing leader Tom Mulcair and acknowledged the leadership of Jack Layton, Tom’s predecessor who brought the party to new high levels in 2011.

He also remembered to mention and give credit to his competitors for their contribution while seeking their united support moving forward, He acknowledged Niki Aston and her work for women’s rights, engaging and reconnecting new generation to the party, fighting unemployment and social justice.
He acknowledged Guy Caron as a true visionary, who not only knows how to face the challenges today but also prepare for the future ones, that his contribution helped in understanding Quebec, their politics, policies and culture.
He mentioned the invaluable contributions of Charlie Angus for indigenous justice and for being the grass root organization pillar of the party. 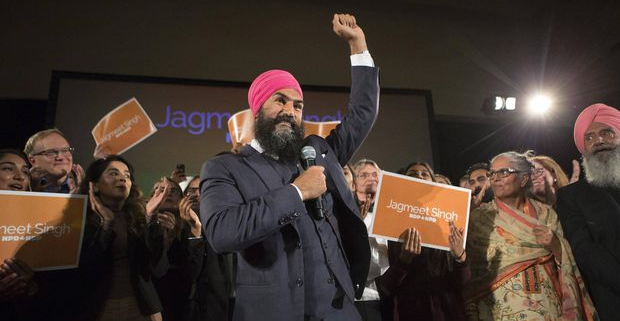 Sardar Jagmeet Singh, Celebrating his victory as the New Leader of the New Democratic Party of Canada

Jagmeet Singh, a non white minority leader has it in him to align new generations of people with NDP. He is the young, dynamic, stylish, modern leader with an all inclusive style, a serious bilingual contender who can give the current Prime Minister, Justin Trudeau, a run for his money in 2019.

He said before the results, “I will win, I do not have the luxury of thinking about of a possibility of not winning” Such is the belief he has in himself that he wishes to carry forward to serve the nation in 2019.

Saying he launched his leadership to make progress on issues such as income inequality, the pay equity gap, housing affordability, climate change, reconciliation and electoral reform, Jagmmet Singh pledged to ensure no one in Canada is stopped by police for the colour of their skin.

Jagmmet Singh also explained how he decided to learn to speak French because he wanted to form a bond with Canada’s francophones and pledged to respect and protect French as he readies for the next big fight in his political career, preparing for the federal elections in 2019.
“Canadians must stand united to champion the politics of courage over the politics of fear, the politics of love to fight the growing politics of division,” Singh said, with supporters, friends, family members and fellow candidates crowded in around him with non-stop chants of Jagmeet echoing in the exited crowded gathering and smiles form east to west on the radiant hopeful faces of a new Canada, a new tangerine horizon on the east.

Jagmeet Singh told the story — a staple of his campaign — about his family’s struggle to get by during a period when his father was unable to work. He described it as a “glimpse” of the sort of challenges countless Canadians endure every single day, people whose priorities have been abandoned by the current government.
“It’s unacceptable that our government tells people to just get used to unstable work,” said Singh, referring to Finance Minister Bill Morneau’s infamous comments about what he considers the realities of the modern economy.

“Maybe if you look at employment as a hobby, you can get used to unstable work. But if your work means the difference between putting food on the table or a roof over the heads of your family, then job insecurity is unacceptable.”

“Canadians deserve the kind of government that only New Democrats can deliver … that gets the job done and that keeps its promises. That’s why today I’m officially launching my campaign to be the next prime minister of Canada.”