The complaint pertained to an  article published on 16 March 2018, which still has not been amended by the Toronto Sun, Candice Malcolm wrote: ‘A Shaheed is an Islamic or Sikh martyr who died fulfilling a religious commandment and is promised a place in paradise.’ 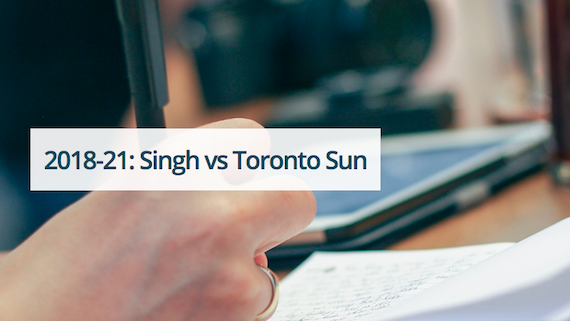 SikhPA notes that the concerned article came at the height of a right-wing- driven media frenzy in Canada which exploited Justin Trudeau’s visit to India to unleash a barrage of allegations of so-called Canadian Sikh extremism.

“In response to Malcolm’s article, the Sikh Press Association submitted a complaint to the NNC. The complaint explained that the concept of ‘paradise’ as a reward for martyrdom did not exist in the Sikh tradition, in contrast to Abrahamic faiths, which include Islam. The complaint said that Malcolm’s statement ‘borders on prejudice’ because of her assumption that Shaheed refers to the same thing for both Sikhs and Muslims”, reads a release by SikhPA.

A release issued by Canada’s National News Media Council in this regards reads as follows:

The National News Media Council has upheld a complaint against the Toronto Sun about inaccuracy.

The complainant, Jaskaran Singh, said an opinion column, published on March 16 2018 in the Toronto Sun under the headline “NDP Leader Jagmeet Singh linked to Sikh rapper who promotes independent homeland”, contained a factual inaccuracy. Specifically, the complainant said that the statement “A Shaheed is an Islamic or Sikh martyr who died fulfilling a religious commandment and is promised a place in paradise” is factually inaccurate. He said the statement “borders on prejudice” in assuming the word means the same thing to different communities and in different languages.

The complainant noted that Sikhs do not have a concept of heaven in the same way Abrahamic faiths do, and referred to a specific Sikh academic for an explanation of the term. He stated that the opinion writer spoke to a Punjabi and Hindi speaker for a translation of “Shaheed”, but discounted that effort in favour of referring to a professional Sikh educator. There is no indication how the complainant knew of the writer’s inquiries, and the news organization did not respond to that point.

The news media organization responded to the complaint by offering to publish a letter to the editor on the issue. That offer was repeated when the complainant demanded an apology and offered a meeting to explain the problem with the statement in question.

The complainant’s demand and news organization’s offer of a letter to the editor was repeated until the complainant gave a concise statement that “Sikhs DO NOT believe being a Shaheed is a gateway to a place in ‘paradise’…“ This was corroborated by a knowledgeable source sought out by the NNC, who said the statement in the article was factually incorrect in that Sikhs do not have a concept of heaven and that martyrdom is not a route to heaven for Sikhs.

In reading the article as a whole, it described in detail the music and video of a person alleged to be connected with a Canadian political leader. The complaint centered on the sentence describing the meaning of the word “Shaheed”.

In previous decisions, the NNC has supported the widely accepted journalistic standard that columnists have wide latitude to express points of view that are strongly stated, unpopular, and even offensive. However, the facts on which those opinions are based must be accurate. While the NNC defends the latitude of columnists to express opinion as important to freedom of expression and the opportunity to hear diverse points of view, in this case there is a factual error in the sentence in question.

For this reason, we uphold the complaint about accuracy.

The NNC is disappointed that the newspaper failed to respond directly to the complaint about a factual error, and is likewise disappointed that the complainant was not more direct about clearly defining the error. Timely response can educate and build trust among readers, provide helpful opportunity for journalists, and prevent complaints being escalated to the NewsMedia Council.

At the same time, the NNC commends the news organization for offering space for the complainant to express a point of view on the issue, as information can educate the general public and build understanding.

Speaking of the NNC decision, Dr Jasjit Singh, a research fellow at the University of Leeds who has conducted research into so-called Sikh ‘radicalisation’ in the UK, said: ‘This decision highlights the need for journalists and those commenting on Sikh issues to undertake a sufficient level of research when discussing Sikh concepts. I am pleased my research on Sikh narratives and issues has provided clarity on the use of the term Shaheed in a Sikh context.’

Jasveer Singh, Sikh Press Association senior press officer, said in response to the NNC’s finding: ‘It is great to see the NNC recognise this inaccuracy in the Toronto Sun. It took more than a month for this decision to come-about, involving lots of dialogue between all involved. We now hope Candice Malcolm and the Toronto Sun will publicly apologise for misportraying what it means to be a Sikh Shaheed. Sikhs are more than capable of defining our own concepts. This finding confirms that it is dangerous when others do so for the purpose of lumping Sikhs with Jihadis to further their own scaremongering narratives.

‘Revering our Shaheeds is a big part of the Sikh faith. However, they are not revered for doing something to get into ‘paradise’. They are revered for standing up to injustice and fighting oppression, and giving their lives to do so. The Sikh Press Association thank all of our supporters in Canada for helping us to tackle media misrepresentation of our community. We will continue to do all we can to grow and become established in Canada and North America as a whole.’