Capt Amarinder holds rally in Bathinda: Pledged to end the scourge of drugs in the state 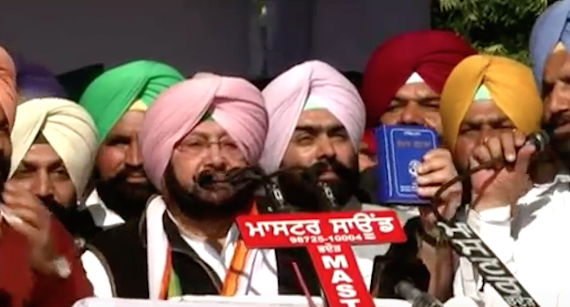 A written press release issued by the organisers of the rally reads as follows:-

Bathinda, December 15: Promising a new era of happy and prosperous Punjab, Punjab Pradesh Congress Committee President Capt Amarinder Singh today pledged to end the scourge of drugs in the state along with corruption and police high handedness as a top priority after forming the government in 2017.

Expressing concern over the growing suicide by farmers, Capt Amarinder appealed to them to bear with him for one year more and he will ensure all their problems were solved and sorted out once he formed the government. He also announced that he will stop auctioning of the land of the farmers who may have defaulted on loans as also provide subsidy to the industry to buy land to set up units in Punjab. He said, once the government is formed he will talk to the banks to provide relief to the farmers.

Addressing a mammoth gathering of over five lakh people, after taking over as the PCC president for third time here today, Capt Amarinder took a pledge while bowing towards Dam-Damma Sahab with Gutka Sahab in his hand, saying that he will put to an end the scourge of drug pedalling that has destroyed an entire generation within a brief period of time.

Buoyed over the presence of such a huge number of people along with the entire party leadership including all the MLAs, MPs and office bearers from the state, Capt Amarinder declared that this rally will mark the beginning of the end for the Akalis.

Holding the Chief Minister Parkash Singh Badal directly responsible for sacrilege of Guru Granth Sahab in Bargari he said, if the scope of the CBI inquiry is widened and police action included in it, the actual finger will be pointed at the Badals only. He said, Badal wanted the public attention diverted and he ordered the sacrilege of the Guru Granth Sahab without realising it will mark the beginning of his end.

The former Chief Minister said, eradicating the problem of drugs will be his top most priority as it had destroyed an entire generation. “We cannot let our youth to be consumed by the drugs and I promise you I will eradicate this problem within few months only”, he said amidst a thundering applause from over 5 lakh crowd.

He announced that all the false FIRs registered against the Congress workers across Punjab will be cancelled on the first day only. Besides, he said, ending corruption with be his topmost and urgent priority.

Referring to the undue control of the Badals over the religious institutions like the SGPC, Capt Amarinder said, while the Congress being a secular party cannot participate in these elections, but he will personally support anyone and everyone who will oppose them (the Badals) when elections will be held to ensure their defeat.