Capt. Amarinder to be sworn in as new Punjab CM on March 16

Chandigarh: Captain Amarinder Singh was on Sunday unanimously elected the new leader of the Congress Legislative Party (CLP) in Punjab, after which he formally met the governor to stake claim to government formation, thus clearing the decks for him to be sworn in as the new chief minister of the state.

The swearing-in ceremony will take place here on Thursday, March 16, at 10 a.m, when Captain Amarinder will take the oath as chief minister. Captain Amarinder told mediapersons that a few cabinet members will also take their oath of office along with him but did not give any details.

AICC secretary in-charge of Punjab affairs, Asha Kumari, told mediapersons that the election of Captain Amarinder as the CLP leader took place at the Congress Bhawan, where all the newly elected MLAs passed a one-line resolution authorizing AICC president Sonia Gandhi and vice president Rahul Gandhi to take a decision on the new CLP leader. 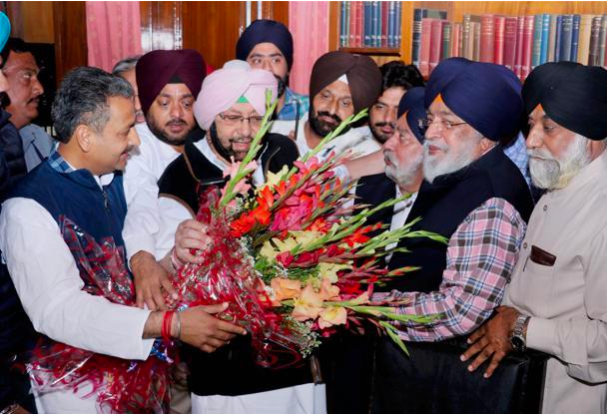 Congress leaders and Sarna Brothers of Delhi meeting Captain Amarinder Singh at Moti Bagh Palace in Patiala on Sunday, a day after the Punjab election results

Apart from Asha Kumari, other AICC leaders present at the CLP meeting were Ashok Gehlot (head of the Congress screening committee for Punjab elections) and Harish Chaudhary (AICC secretary.

At the meeting, outgoing CLP leader Charanjit Singh Channi read out a statement thanking the people of Punjab for their stupendous support in the just concluded state assembly elections.