The Congress ‘gherao’ of the CM’s house was scheduled at 11am, which Badal noted with punctilious punctuation as he sat near the entrance for Amarinder and his team, who arrived around noon. 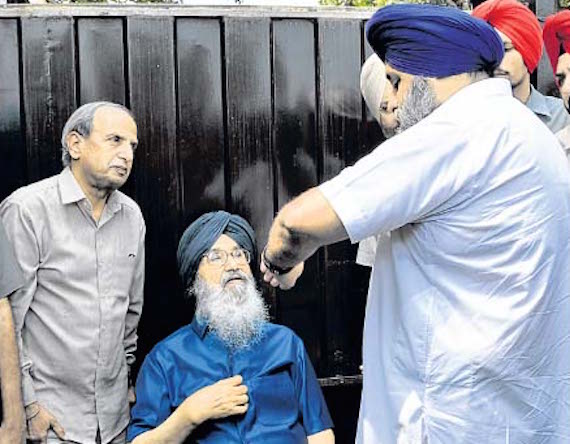 Badals waiting for the protesters

According to Daily Ajit Punjab Chief Minister Parkash Singh Badal along with Sukhbir Badal and others had arrange for tea for the protesters. After waiting for about half and hour, CM Badal left for the secretariat to see a Korean delegation. 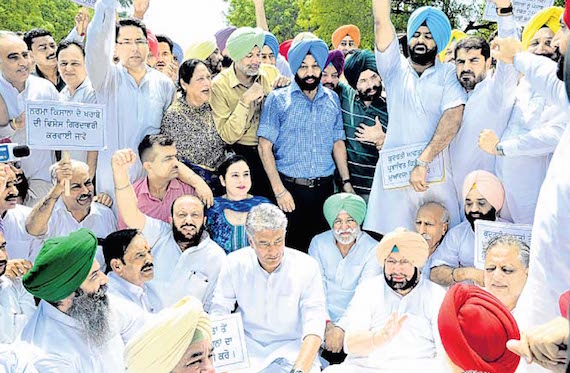 “I have been punctual not only here but in every public function. I could not afford to reach late, especially on such a scheduled meeting,” said CM Badal.

Capt. Amrinder Singh was supposed to be there with full force of 43 Congress MLAs but 21 of them stayed away. Capt. Amarinder Singh’s opponents with in the party, including state Congress chief Partap Singh Bajwa, Rajinder Kaur Bhattal and Lal Singh, did not turn up at the protest.

He, however, unfazed and termed the ‘gherao’ a “big success”, arguing that the MLAs had a little time for the dharna was organised at a short notice of 48 hours.

The protest was called by the opposition party to press the government to get the arrears of sugarcane growers cleared as Sugar mills of the state have been harassing the farmers by not making payment of already procured sugarcane.

Later in the evening the Punjab government issued a response saying that: [t]otal outstanding arrears towards cooperative sugar mills was Rs 540 crore, of which Rs 210 crore and Rs.240 crore have been paid. The government said that the balance Rs.90 crore would come next month. Likewise, the total amount of outstanding arrears towards the private sugar mills was Rs 1,123 crore, out of which Rs 900 crore has been cleared. The High Court is due to hear the case concerning the arrears on September 10″.