Hoshiarpur: Dal Khalsa today chided Captain Amarinder SIngh for calling the pseudo Nirankari Baba Hardev Singh a spiritual leader and said, “If that is so, then the faith of Captain Amarinder Singh in Guru Granth Sahib and Sikh philosophy is highly questionable.”

Reacting sharply to the language of Captain’s condolence statement, party spokesperson Kanwar Pal Singh said he was saddened to read the statement of the Punjab Congress chief.

Notably, Captain Singh while mourning the death of Nirankari head, has said that “It is a great loss not only to the Nirankari followers, but to the humanity as a whole as he was a great spiritual leader of our time”. 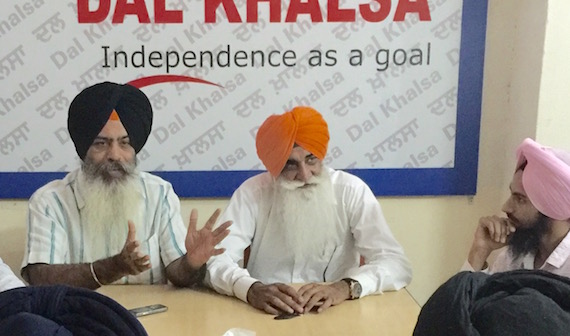 He said the statement of Captain was more than the expression of grief. He has gone to the extent of praising a person, who posed challenge to the Guruship of holy Granth Sahib. “Lest it be forgotten, it was Captain’s Congress party that encouraged and patronized this heretical cult with an aim to undermine the basic fundamentals of Sikhism, he said.

It appears that in the pursuit of petty politics and his lust to capture the chair of CM, the former scion of the Patiala household has totally forgotten that he was a Sikh first and that neo-Nirankaris have been excommunicated from the Sikh Panth. He questioned Amrinder whether he has forgotten what happened in Amritsar on Baisakhi day on April 13, 1978.

We feel pity that the majority of Sikhs of Amritsar have chosen Captain to represent their voice in the Lok Sabha. “Sikhs of the holy city preferred him over an RSS functionary (Arun Jaitley)”. The cat is out of bag and that Captain Stands exposed by his anti-Sikh and unprincipled utterance, said he.