Fairfax, VA: (June 8, 2018): Taking the podium at George Mason University (GMU), Lathan Dennis-Singh said, “This Captivating the Simple-Hearted is a profound literature, one that has got me to reevaluate myself as a Sikh.”

On June 3, the GMU Sikh Student Association organized a book launch for Captivating, a new book co-authored by Pieter Friedrich and Bhajan Singh. “Journey with us to discover from the challenges of Guru Nanak, Dr. B. R. Ambedkar Sahib, Kabir ji, Ravidas ji, where is the Mulnivasi nation today,” said Singh. Friedrich explained, “We wanted to produce something that puts the history of the Sikh people in big picture context of the entire history of the Indian subcontinent, examines that history, helps people to comprehend it, and helps people to understand why the history of the Sikh people and the development of Sikhi was so crucial — really a turning point — for the history of the subcontinent.” 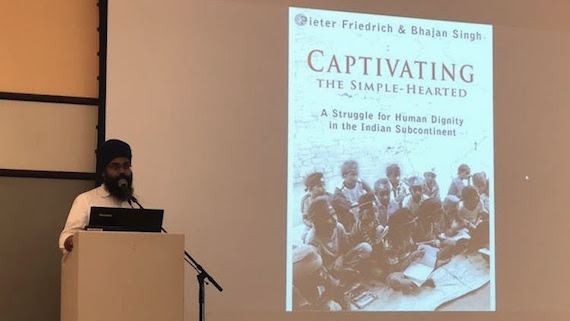 A diverse audience joined the authors. Representatives from Ambedkar Association of North America (AANA) and Indian American Muslim Council (IAMC), as well as community leaders from local Sikh Gurdwaras, spoke in praise of the book. “We have been working on creating and developing our own Dalit history,” remarked Sanghapali Aruna Lohitakshi, a Dalit feminist from India. “We need to be producing more, and more, and more books which actually talk about resistance. It is the history of Bahujan resistance which we need to bring forward.”

Afsal, speaking on behalf of IAMC, said, “One of the key platforms that we focus on is educational awareness. Books like these really help in a big way. I’m a big history buff. I love this book. We need more such books as these. I will definitely invite another book event at another location.” Opening the book, he said “There’s this quote that really caught my attention.” He read a passage quoting Guru Nanak, who wrote, “The kings are tigers, and their officials are dogs; They go out and awaken the sleeping people to harass them.”

Friedrich said the book avoids relying on “court historians” who tell history from the perspective of the ruling elite. “We wanted to produce a book which is accessible to the common person, which is succinct, and easily digestible,” said Friedrich. “We also wanted to produce an historical narrative which relates how the history of the Indian subcontinent was irrevocably changed for the better by common people.”

During a reading from the book, Friedrich and Singh were joined on stage by three volunteers from the GMU Sikh Student Association who took turns reading quotations from Guru Granth Sahib. Organizers passed out books to the audience, who followed along intently. The reading focused on how the caste system enabled the successful invasion of the subcontinent by Mughals, who instituted a collaborative Mughal-Brahman co-rule. Thereafter, Sikh Guru Arjun was arrested and ordered to renounce his writings. He refused and was executed.

“This very profound work reveals the contribution the Sikh martyrs have made for us to be free men and women today,” said Lathan Dennis-Singh. “I’d like to say how well this book can work to serve students of Sikhism and the wider community. I’d very much like if we could have this text used as Sikh history in school curriculums.” Subsequently, in a review, Singh wrote:

“The birth of Sikhism and the Khalsa Panth, according to the authors, gave Guru Sikhs the power of authority to defiantly resist the shackles of bondage and caste prejudices set by the traditional barbaric system of socio-political hypocrisy; disregarding the price in self-sacrifice ordained by the ruthless magnates.

“The authors, Pieter Friedrich and Bhajan Singh, capture the historical significance of the reform and resistance movements that place Guru Nanak ji and Sikhism at the forefront of an all-encompassing concept of a world order that is totally relevant to present and future challenges we face in liberation of all global communities.”

“We extend special thanks to Pawan Singh, a dedicated individual focusing on building the Mulnivasi Bahujan nation,” says Bhajan Singh.

Previous book launches occurred at UC Davis, at Union City in California, and at Toronto in Canada. The book is available for purchase online at www.sovstar.com.